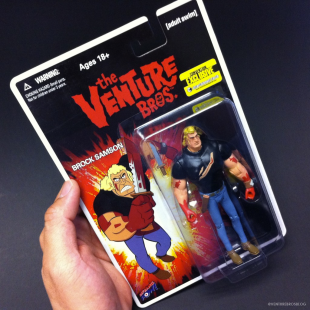 The San Diego Comic-Con is a-coming and with it we expect the usual parade of cosplay, announcements and general geekery that we've all come to know and love. And, of course, while we're sure that most of the attendees will be there to soak in the wondrous aura of nerdom (which they'll probably need to shower off later), we're willing to bet that more than a few will also be on the lookout for those lovely pieces of exclusive merchandise that frequently show up to the show.

Case in point, fans of The Venture Bros. attending the convention will be able to pick up two pieces of collecticble merchandise, both of which will special to the event. The first, will be a Brock action figure boasting a black t-shirt with some bloody gashes across its front and blood all over his hands. The Brock figure will sell for $14.99.

While both items are available for pre-order and will be more widely distributed in the future, they will debut as Comic-Con exclusives. Just personally, I'm more of an action figure man myself, but considering the limited nature of the shot glass set I couldn't blame others for going after those first.

Doc and Jackson are so great, but they're soooo slooooow.

Man I am so jelly right now. Speaking of the show, when the hell is the next season gonna to start well the rest of the episodes?

A limited run of only 798? I have a sneaking suspicion that they ordered 800 and decided to keep one each for themselves.
E

I want those shot glasses!

Fappy said:
Now all they have to do is actually make the next season XD

Doc and Jackson are so great, but they're soooo slooooow.
Click to expand...

Yeah...seriously... I know they do all the writing & most of the voice acting themselves, and they oversee most of the production, but yikes

This is probably how Sherlock fans feel.