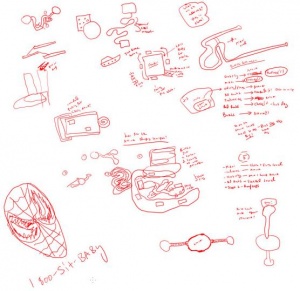 David Jaffe has doodled ideas for Eat Sleep Play's first game while the development team in Utah puts the project together.

Founded a year ago [http://www.escapistmagazine.com/news/view/75389] by David Jaffe of God of War fame, Eat Sleep Play's 20-person studio has since started on its first of three games [http://www.escapistmagazine.com/news/view/75806] being published by Sony. The developers, many from the Twisted Metal franchise and longtime friends with Jaffe, work from their Utah building while he remains at his home office in San Diego.

Jaffe's latest blog update shows a screenshot of crude level designs for the game. Drawn by someone who is quite clearly not an artist, the sketches imply we can expect Eat Sleep Play's game to include a number of winding corridors and some vaguely large arenas that seem designed for major in-game events or battles. Side notes written for the developers are indecipherable from his screenshot. The side-drawing of Spider-Man and the corresponding digits are assumed to either not be part of the game or show us just how off-beat the title might be.

Jaffe's post explains:
[blockquote]
This is just my screen showing my doodles for level design of our newest level. I have not even sent these off to Utah yet, so who knows if they will make it into the game or not.

But I figured I'd share a bit of what's up with the work on my end. Out in Utah I know the team is scrambling to get a nice, sexy build of the game going for a Sony Dog and Pony next week. While I am sure I would drive some of them crazy if I was out there everyday- and the very successful, very functional alliance we've forged over the last 12 years would prob. not work with daily, real life connection- it's times like these I WISH I was out there, so I could help with the crunch.
[/blockquote]

Eat Sleep Play ported Twisted Metal: Head On from the PlayStation Portable to the PlayStation 2 to help fund its original intellectual properties, the first of which is expected to be out later this year. 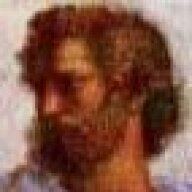 This is a joke, right? This is some satirical piece on the overzealous coverage that the media has for big game developers. Or stolen from The Onion, right? I'm just going to assume that, mkay.

dukeh016 post=7.68440.628761 said:
This is a joke, right? This is some satirical piece on the overzealous coverage that the media has for big game developers. Or stolen from The Onion, right? I'm just going to assume that, mkay.
Click to expand...

I'm hoping with you.
Or maybe we'll get some kind of awesome doodle-graphics game?
...I honestly don't know what to make of all this. 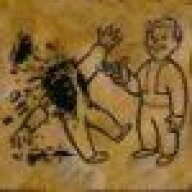 dukeh016 post=7.68440.628761 said:
This is a joke, right? This is some satirical piece on the overzealous coverage that the media has for big game developers. Or stolen from The Onion, right? I'm just going to assume that, mkay.
Click to expand...

Knowing Jaffe it could go either way, but it sure is a long way from 1,000 page design docs!

Level design documents are well known to look exactly like that.

You usually sketch them up a bit better in illustrator before sending them off though.