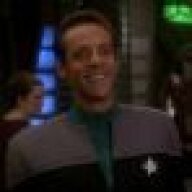 Sarah LeBoeuf said:
On my second attempt, I tried to be more observant and meticulous in my exploration, but still had that nagging feeling of "Am I on the right path? Am I doing the right thing?" which undermined my feeling of progress.
Click to expand... 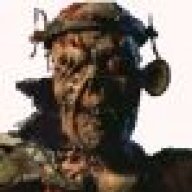 ZippyDSMlee said:
Don't forget kids you can brake bones(with moderate luck) with flares and they cost little to throw, I got a few deathclaws with that trick.
Click to expand...

You can? I never really found much of a use for flares myself.

I'll have to keep this in mind for my next playthrough when going up against a deathclaw.
Click to expand...

They forgot even at low damage you can still cripple stuff and they cost 1AP a throw I think god its been so long but ya I messed stuff up with them tho I never put much into throw.
Click to expand...

Don't forget the no-damage insta-kill crits you can get by hitting the eyes.
The Flare build is pretty lulzy.

ZippyDSMlee said:
Don't forget kids you can brake bones(with moderate luck) with flares and they cost little to throw, I got a few deathclaws with that trick.
Click to expand...

You can? I never really found much of a use for flares myself.

I'll have to keep this in mind for my next playthrough when going up against a deathclaw.
Click to expand...

They forgot even at low damage you can still cripple stuff and they cost 1AP a throw I think god its been so long but ya I messed stuff up with them tho I never put much into throw.
Click to expand...

Don't forget the no-damage insta-kill crits you can get by hitting the eyes.
The Flare build is pretty lulzy.
Click to expand...

Forgot about that hehehe.

All in all its less of a lulz fest than FO3+ but that's a rant for another time.
T

It's surprising to me that it took so long to see an article like this, especially seeing as it sort of highlights exactly the problem a lot of people, like me, have had with the more recent Fallout games (3 and New Vegas) and why we have maintained that they were not worthy of the "Fallout" name despite being good games on their own merits. I play the most recent "Fallout" games but continue to maintain Bethesda should have developed it's own post apocalyptic franchise.

The whole trial and error approach and rather nebulous directives were half the point of the "Fallout" games combined with the relative absurdity and level of lethality involved in the game. The fact that it was quite doable, and actually pretty easy on a lot of levels once you knew what you were doing, was also part of the appeal, and honestly why so many relatively hardcore gamers loved the series, and have decried Bethesda for making things a bit too easy, and typically providing a clear step-by-step handholding to the end of the game.

One thing I will point out about Fallout though is that the time limit isn't actually as bad as it appears, it's possible fairly early on to arrange water shipments to the vault, which renders the need for the purifier chip more or less irrelevant, your new longer time limit becomes the time before The Master discovers and wipes out The Vault. You however wind up with plenty of time to dick off, it's not a situation where your on a tight schedule to figure out
every step you need to complete to win and can fail by travelling aimlessly for a bit.

Fallout 2 also included a time limit of sorts (which is why it surprises me people mention preferring 2 for the reason of not having one). Indeed unless you cheated with a guide or already played the game it's pretty much impossible to know that the time limit is meaningless. To begin with your looking for a GECK instead of a water purification chip to save your settlement, and are racing the clock before everyone dies. Of course if you find the GECK or run out of time The Enclave attacks your village and either way you head to the actual "fight the enclave" objective.

That said I'm admittedly not fond of time limits, and wasn't all that happy with that particular aspect of the games, but I do feel that they encouraged a kind of trial and error approach and a level of relatively hostility that you just don't see today, which contributes to the dislike of casuals. Half the fun of something like "Fallout", "Wasteland", or the original "Might And Magic" was a general objective, needing to explore to figure out how to achieve it (and in the case of M&M1 the objective was pretty much "your an adventurer! go out an adventure. There is a secret in The Inner Sanctum, I wonder what it could be? Or heck, where is The Inner Sanctum anyway?). Hand holding tutorials? As a recent review of Wasteland pointed out, the polite greeting for a real RPG game was to dust the curb off a bit before slamming your face into it a dozen or so times.

The definition of "tough but fair" has generally changed so much that it's barely recognizable to some. Of course the occasional arbitrary nastiness of something like Fallout was part of the humor in a way because the entire world just kind of exuded how messed up it was. The kind of thing where you saved game frequently because as soon as you come out of the vault cave, excited that you've mastered shooting nearly defenseless rats (that still probably chewed you up a bit) and perhaps switching to a knife to stap them, head to your first known example, randomly meet a pack of wandering rad scorpians and scream as your face is eaten.

That said in addition to my usual "you kids have it too easy compared to us real gamers" fogey routine I'll pretty much "spoil" the best opening move in Fallout for you, if anyone is currently playing this or re-playing it.

Save game before leaving the vault save and in walking to your first objective keep reloading until you get an encounter with a wandering trader. He has a higher than normal chance of appearing right off the bat at the beginning than he does otherwise, and with a few tries can be easily found before you discover the first village on your way to the other vault.

One thing about Fallout is that stealing is very easy, given that it adds positional bonuses that rapidly add up more than your actual skill, and with saving and reloading you can eventually make any die roll. What you want to do with the trader is pretty much run around and steal from all of his guards (save, load, save load) which will allow you to stock up on rifles and ammo. The hunting rifles you get ARE heavy and aren't the best weapon in the game by far (but better than your starting gun) but they trade fairly well. Since your liable to score an SMG in the vault anyway, what your looking at is enough value in the first few minutes of play to pretty much gear yourself up enough as soon as you meet the first serious merchants to break the game by providing a disproportionate amount of power to the game structure right off the bat, which will just get worse as you can pretty much ensure from that springboard you'll be a few steps ahead of whatever the game assumes the best you could be packing is.

Also your eventual goal in Fallout should arguably not be to use guns or energy weapons, the most stupidly broken weapon in the game is the "Super Sledge". Saving and loading your way through some tense initial gunfights (and just autofiring all the time) tends to be worth having the game eventually become a cakewalk when your basically able to called shot a Deathclaw's eyeball and send it flying a huge distance across a room with one shot, only to get up, charge back into melee range, and then wind up back where it started on the other side of the room again... one shotting super mutants and other stuff also becomes childsplay and you don't have to worry about toting too many cells for your turbo plasma rifle.