Alvin Schwartz's horrifying children's anthology will be receiving the movie treatment it has long deserved.

While Guillermo Del Toro's latest effort, Crimson Peak, may not have been the box office success he envisioned (no doubt thanks in part to mostly positive reviews [http://www.escapistmagazine.com/news/view/161107-Chinese-Censorship-Laws-Might-See-Crimson-Peak-Banned-From-Theaters] across the board, with critics citing Del Toro's visual mastery of modern, gothic-tinged horror as the driving force behind the film's narrative sucesses.

For those familiar with Del Toro's body of work, the critical praise comes as nothing new. The Mexican-born director has shown a knack for subtly blending fantasy and horror elements into his films dating back to his 2001 Spanish feature The Devil's Backbone, and most notably, with 2006's Academy Award-winning dark fantasy film, Pan's Labyrinth. So when determining which director would be perfect to adapt, say, the classic children's horror anthology, "Scary Stories to Tell in the Dark," you'd like to think that Del Toro's name would be somewhere near the top of that list.

Thankfully, it appears that Del Toro is already two steps ahead of us, as he announced plans late last week to bring "Scary Stories" to the big screen via Twitter [https://twitter.com/realgdt?lang=en&lang=en].

While it's not yet know whether or not Del Toro will serve as the upcoming film's director, he is already locked into the project as a producer, so it's safe to assume that "Scary Stories" will feature many of his signature touches before all is said and done.

Those books scared the shit out of me as a kid. I hope he captures the creepiness of the art.

I'm not sure how you adapt a short story anthology, though.

Fox12 said:
Those books scared the shit out of me as a kid. I hope he captures the creepiness of the art.

I'm not sure how you adapt a short story anthology, though.
Click to expand...

By re-working the stories to all fit within the same singular story.

Man, those books scared the shit out of me when I was a kid.

The pictures alone in the books always made me jump when I turned the page and gave me nightmares.

I really think Del Toro can make the stories into a great horror movie. The guy knows how to scare the hell out of people, and I'm all for him making a movie out of it.

For me it was 70% illustrations and 30% story that scared me when reading these books, right now thinking back the only story I can slightly remember was the one about a wendigo I think.

Oh man, if they can capture the creepy images that haunted my dreams as a child. I'm all for this.

Loved the first book as a kid. I am so looking forward to Guillermo's version of this: The cool part of some of the art is how it's dripping - is it blood? Is it hair? Oh obviously blood because THAT happened 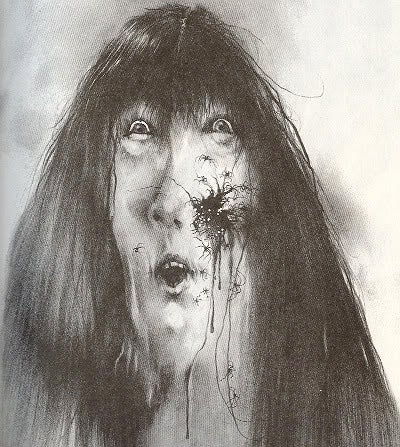 I still love spiders to this day, probably the only person in my house that does heh.
Don't screw this up! I wore that book out as a kid and aww shi...I may have to buy the full anthology now with a possible movie coming.

I'd love to see the look on the faces of the adults who realize to late that they dun goofed when they read 'children's movie', I can already hear the screaming/crying/liquid-poop streaming from the sweet, sweet childrens.
V