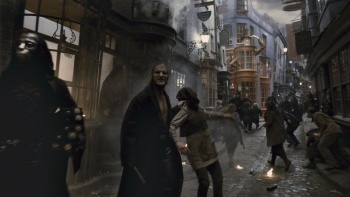 The actor, who played werewolf Fenrir Greyback in three of the Potter films, was found by hikers on Sunday.

David Legeno, the British actor and martial artist best known for portraying Harry Potter villain Fenrir Greyback, was found dead on Sunday morning in a remote part of California's Death Valley. A group of hikers came across Legeno's body, which was transported from the area by helicopter.

Local police have said there is no sign of foul play, and preliminary analysis suggests the 50-year old actor died of heat-related issues. The Inyo County coroner is scheduled to determine the final cause of death at a later date.

Legeno is probably most famous for playing the werewolf Greyback in the last three Potter films, Harry Potter and the Half-Blood Prince, Harry Potter and the Deathly Hallows - Part 1, and Deathly Hallows - Part 2. A new Harry Potter spin-off film, Fantastic Beasts and Where to Find Them, is <a href=http://www.escapistmagazine.com/news/view/134490-Harry-Potter-Spinoff-Film-Fantastic-Beasts-and-Where-to-Find-Them-Gets-Release-Date>scheduled to release in November 2016.

In more positive news from the Potter world this week, author J.K. Rowling released <a href=http://www.escapistmagazine.com/news/view/135979-JK-Rowling-Explores-Harry-Potter-Grown-Up-in-New-Short-Story>a new short story depicting the grown-up lives of her characters.

Recently down in Southern California there have been huge spikes in the weather when it comes to heat, and the desert has been some of the worst. Such a shame that the heat claimed another, and David was still pretty young really. Condolences to the family.

I don't mean to be dickish, but I don't remember that character at all.

I don't mean to be dickish, but I don't remember that character at all.
Click to expand...

I don't mean to be dickish, but I don't remember that character at all.
Click to expand...

The werewolf guy. I don't even remember him having much screentime, but I remember him from the books.
Click to expand...

Indeed, he was there more or less to be there, he was a bigger deal in the books (a lot of things from the books were missing from the movies, or modified... to do everything verbatim probably would have tripled the size of the movies... perhaps some day we might see a multi-year TV series).

That said, understand if there was foul play involved here, Muggles like us would never figure it out. I'm sure The Ministry Of Magic is on it though and tracking unlicensed weather control charms as we speak. That Potter fellow, you know the one, is well on his way to becoming quote the Auror, or so I hear. Perhaps the best since old "Mad Eye" lost his touch and bit it....
M

Man dies in Death Valley, to the surprise of no one

McGuinty1 said:
Man dies in Death Valley, to the surprise of no one
Click to expand...

I mean, it is called DEATH valley so you would kind of expect the namesake in that area...

But, in all seriousness, rest in piece, you werewolf Death Eater...
R

Neronium said:
Recently down in Southern California there have been huge spikes in the weather when it comes to heat, and the desert has been some of the worst. Such a shame that the heat claimed another, and David was still pretty young really. Condolences to the family.
Click to expand...

Until/unless they make the autopsy report public its impossible to accurately speculate on the cause but I guess you're right, the report said it was related to his heart so it sounds like he was out walking, it might gave gotten really unexpectedly hot and he ended up getting a bit dehydrated and it thickened his blood. Combine that with being older (in his 50s) and the exertion and it caused some kind pulmonary or circulatory issue, its terrible how fragile we can be at times.

Just out for a hike one day and thats it, you're gone. I feel for his friends and family.

I should point out that making jokes about this is in poor taste. There isn't really a 'funny' thing here.

I spotted the "fantastic beasts and where to find them" tag before I clicked the link, and thought it was one of those joke tags the Escapist is known for. It still has virtually bugger-all to do with the content of the story beyond an unrelated plug that I hope the writer at least got paid for.
Show hidden low quality content
You must log in or register to reply here.
Share:
Facebook Twitter Reddit Pinterest Tumblr WhatsApp Email Link
Top Bottom