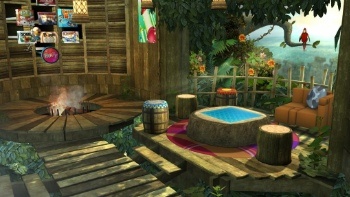 Boggle, Yahtzee, Connect Four and others amongst the classic board games being prepared by Electronic Arts.

If there's anything that Xbox Live Arcade could do with more of, it's family-oriented board games, as evidenced by the runaway success of Uno. Electronic Arts has gotten that message load and clear and is leveraging their control of the Hasbro license to bring a collection [http://finance.yahoo.com/news/EA-Delivers-Scrabble-to-Every-bw-13976475.html] of all-time greats to the downloadable space, complete with its own hub area within the Xbox dashboard. Come Spring 2009, the Hasbro Family Game Night channel will play host to Boggle, Battleship, Yahtzee, Connect Four, Sorry and Sorry Sliders, with additional releases to be made throughout the year.

While no exact dates or prices were mentioned in the EA press release, the games will feature online play, standard as well as alternate rules and other, at the moment, unnamed features. The Game Night channel itself will act as a customizable hub world for players to share with friends and jump from game to game without ever leaving the environment. Hopefully we'll be learning more than just these basic details very soon as Electronic Arts plans to roll out the whole suite later this week at the Consumer Electronic Show [http://www.cesweb.org/] in Las Vegas.

If the idea of a community-oriented hub for family-friendly online games to be released in the Spring of 2009 sounds familiar, you've probably just recalled distant memories of Microsoft's Xbox Live Primetime series, originally intended [http://www.forbes.com/2008/10/20/microsoft-xbox-primetime-tech-personal-cx_cm_1021msft.html] to launch along with the New Xbox Experience dashboard. While all we ever heard about it was the ability to play games like 1 vs 100 for real-world prizes, the idea of another community hub of classic games does seem to fall inline quite well with Microsoft's original plans.

In other Hasbro news it won't just be Xbox Live users having all the fun as EA intends to release Scrabble Slam for both the Nintendo DS and PlayStation Portable. Hooray for edutainment [http://www.youtube.com/watch?v=0YInfr0hm4A]!

Battleship! Sweeeeeeeetttt. I hope its like the annoying electronic version where it makes explosion sounds and your board lights up.

And to think that used to be a pencil and paper game.

...Why not just play the actual board game?

Optimus Prime said:
Damn, when I saw it would include Yahtzee I almost cried with joy...then I realised it meant the game
Click to expand...

This seems to be a good way for Microsoft to expand it's customer base, and I for one look forward to it. Some of these games are getting harder and harder to find in real life (in my experience at least), and after the success of Settler's of Catan and Uno, as you mentioned, I think these could actually prove to be a success.
Show hidden low quality content
You must log in or register to reply here.
Share:
Facebook Twitter Reddit Pinterest Tumblr WhatsApp Email Link
Top Bottom