Battenberg said:
Even if you got all 60 gold reward quests you wouldn't make 700 gold in a week without spending a huge amount of time getting the less than substantial 3 wins gold reward. Without spending a lot of time grinding for the minimal reward you get every third win (which gets dull fast when you're just starting out and have a severely limited card pool) I'd say it's probably closer to 2 weeks per wing. That's 2 weeks doing nothing but daily quests for one fifth of one adventure and the cards that come with it. Even if you get it down to a week and a half for each wing that works out at over 50 days of only getting play constructed and not getting any more card packs which, as I pointed out, isn't a whole lot of fun and certainly wouldn't endear the game to a beginner.
Click to expand...

The important part you're missing is that not everyone cares about getting access to everything as soon as possible. Us casual players who are happy just playing a few games for quests each week don't actually care that it might take a few weeks to unlock each wing. As long as content isn't released faster than we can unlock it, and as long as none of the cards are so overpowered that you can't do without them, it really makes no difference at all in the end. I think it took me around 4 months to unlock all of Naxxramas, and if anything saving up for each wing knowing there was something fun with a solid reward at the end was actually much more fun than just getting a few packs mostly full of crap that even I already have.

So speaking as one of the people you're trying to argue in defence of, you have it about as wrong as it's possible to be. Adventures as Blizzard has implemented them here are pretty much perfect for the casual F2P player. Those who desperately want to see everything as soon as possible can pay, but those of us who aren't particularly fussed about it will just take our time and not worry about it.


Grumman said:
Every card should be powerful enough to have a place in at least one top tier deck
Click to expand...

No, they shouldn't. A very good explanation for why not can be found here [http://archive.wizards.com/Magic/magazine/article.aspx?x=mtgcom/daily/mr5], covering both why it's simply not possible for every card to be good, and why you shouldn't want that even if it were possible. From the summary: 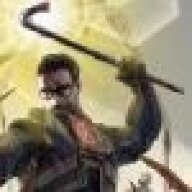 Grumman said:
Every card should be powerful enough to have a place in at least one top tier deck
Click to expand...

No, they shouldn't. A very good explanation for why not can be found here [http://archive.wizards.com/Magic/magazine/article.aspx?x=mtgcom/daily/mr5], covering both why it's simply not possible for every card to be good, and why you shouldn't want that even if it were possible. From the summary:

I have already seen Wizard's excuses for shitty balance, and I am no more impressed with it this time than I have been in the past.

1) No, they don't. "Bad" does not mean having a 49% win rate in a field of 50% and 51% win rates. Balance a complex game that well, and the game is balanced. Bad is like how the last patch for League of Legends screwed things up, where picking Kassadin drops your entire team's chance of winning by a third.

2) If there is no deck which is improved by its presence, who is it being designed for, precisely?

3) That is arse-backwards bullshit. Less advanced players should have less complex cards. Less situational cards. 4-of cards and not 1-of cards. They should not have weaker cards.

4) If the deck exists but nobody has realised it could be a thing, okay, I'll give you that. If the right deck for them doesn't exist because the necessary cards to support it don't exist, then it's a bad card. Steamflogger Boss isn't a good card just because Contraptions could be added to the game, any more than Archangel's Light is a good card just because Wizards could one day add a card that says "When you play a card named Archangel's Light, you win the game".

5) On the contrary, a balanced game is more rewarding of the more skilled player. In a balanced game, winning the deckbuilding phase means creating a synergistic deck with good mana curve that has adequate responses to possible threats. Any dumbass can decide whether or not to put Dr. Boom in their deck, because the answer is always yes.

6) No, they don't. Nobody likes spending $6 on a booster pack and discovering their Mythic Rare is Archangel's Light. Even when somebody likes a card despite it being bad (because they like the art, or whatever), they'd like it even more if it was playable.