If you had the ability to switch your gender?

I would probably change once, it would be interesting to see how people would treat me as a guy but with the personality I have now.

Umm... Well, blast. I can't imagine gender swapping benefitting me other then for messing around.
B

Sometimes I would just sit around my house as a chick and how awesome my tits are.
D

Zachary Amaranth said:
In a heartbeat. I'd spend the rest of my life as a girl.

why though? not sexist or anything im just wondering cus im from a small town thats like a sitcom from the 50s
Click to expand...

Can't speak for his motivation to do so, but I'm right with him on this one. Not because I particularly hate myself or because I think females are superior or any such nonsense. From my point of view, it furthers my agenda of not being dependent on anyone, and that's what attracts me.

See, if I could *be* the model of what I'm attracted to, there's even less reason for me to maintain even the slightest amount of non-essential contact with people.

Past the prejudice and bigotry in our society - I really envy the gays(that's both genders, people) on that point - to some extent they are what they crave.


Not to mention a semi-hot girl appearance, what a boon to social engineering exploits (!) - on the other hand, one could swap back into the guy form when going to work and still get an easier time building a career and getting a bigger salary.

I fail to see the downside to this.

They're not *the same* in that they have different connotations, sure, but it seems a viable interpretation to use them as one and the same...?
]
N

ninetails593 said:
Hmmm, would the female me be my opposite, or my liekness? I wouldn't want to be some black haired, fat, slow, cheerful girl. If it were my likeness then I'd use it to fuck with people. Both figuratively, and literally.
Click to expand...

Good question. I wouldnt want to meet a female form of me, im not in that bad of shape, but I would perfer to be slightly better shape and condition... actually, if I was like that as a woman, I probably would never change back... or maybe I would... Jesus, I should never think about these things right before going to bed... probably going to have a dream of fucking my female self...
Click to expand...

Damn it, that killed my buzz. I was feeling so awesome listening to Big Iron with a pretzel in my teeth. 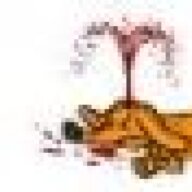 As this has never happened to me before I feel unqualified to coment.

Uh, I'd probably try it once, then never again.