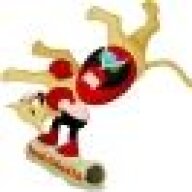 You guys haven't actually pointed out the other problems, either. Being an Australian, I had to wait half a week - with ostensibly wasted money sitting in Microsoft Points that I will otherwise not use - before they worked out how to have the Australian release working with the DLC period. I just couldn't download it at all.. And yup, it was GFWL at fault.

Crappy, crappy, crappy ending aside (I'm not talking about the DLC here, or even the highlight package - just F3 in general, what with the radiat-o-tron room) - people should be able to play their content however and in whatever fashion they want, IMO, and it's ridiculous that they went through GFWL in the first place. It's GFWL's first DLC - and it shows, bigtime. Not to say that the DLC is worth the buy in the first place - it turns an interesting game into a vanilla FPS with about as much depth as a spoon dropping will impact the grand canyon. I liked the setup to get there - but the way it completely revamped the interface, and generally took no note of what you did with your character to that point (I found the first section with my big weapons / melee play account, which I'd made largely just to play with GFWL given my first wasn't.. well, somewhat ingratiating. I had one fucking weapon that fit my playstyle, and it was essentially worthless. I had to sneak up behind people with the trench knife.. but more importantly, you then get people following you around who completely ruin sneaking, too!)

I'd not recommend it to anyone else. I'll probably get the second DLC, but not the third (as I have spare points). Which kinda just makes it worse that I had to really work to get it going.

Jester Lord said:
Im kind of happy i got the ps3 version now.
Click to expand...

BUT NO DLC FOR US

If it's like giving birth, surely the DLC would start off small, get slowly bigger as patches were made, start causing you violent moodswings and pain, cause you to scream at your partner and finally get you to a point where you need drugs?

Well it is a good thing that I have the 360 version, I was disapointed in the fact that you only get one new gun, but I can wear the new power armor without the training and it doesn't degrade for some reason, so I'm good.

Allow me to relate my personal experience trying to get this game add-on to work:
1 - Uninstalled my hotfix I had in place to disable GFW from Fallout 3, then re-installed GFW (ugh).
2 - Created a profile after starting the game, typed in my access key, and searched the game overlay and found nothing.
3 - Went online to the Fallout 3 site and found I had to start it up outside the game.
4 - Had to install a hotfix for the just-installed-ten-minutes-ago GFW-Live launcher, that then restarted my computer without warning. FFFFFFFFFFFFFFFFun.
5 - Went back in, found the add-on in the marketplace, discovered I needed "points" to buy it.
6 - Realizing I would have to give money to Microsoft, thereby giving them the idea I support their god-forsaken service, I gave my screen the double-deuce and gave up.

Is it even worth it?

My friend downloaded it onto his 360 and we played through it with a couple of other buddies in a few hours. If it was part of the main game, it would've been THE most boring mission.