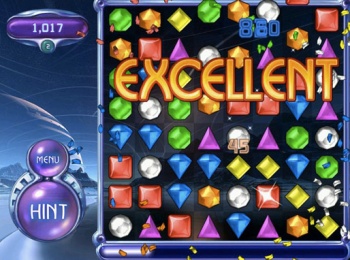 The update (which, again, is a free download) adds integration with something called "Facebook Connect" to the best-selling iPhone game. Long story short, it allows players to enjoy the same sort of online connectivity that the Facebook version was built around.

The official press release offers a less succinct explanation:
The new iPhone Blitz game mode replicates the wildly popular connected version of the game that allows consumers to play anywhere, anytime, with scores and achievements reflected on their own and their friends' Facebook profiles.

While I have no mathematical way to demonstrate why this is yet another phenomenal idea from PopCap, I think it should be noted that both the iPhone's Bejeweled 2 and Facebook's Bejeweled Blitz are among the top handful of games on their respective platforms. Combine the two, and even with the paltry $3 price tag currently affixed to Bejeweled 2 in the iPhone App store, it's not hard to imagine PopCap's employees swimming in a Scrooge McDuckian vault of gold coins while the rest of us forego food, sex and interpersonal relationships in favor of matching colored gems.