James Bond 007 (Gameboy) - The power of the GBA SP, a thift store, and Nostalgia

This little tale starts with NewClassic, in the Atlanta airport, at the young impressionable age of "child." After eating a hearty meal of Sbarro Pizza and way too much grease, he got to his feet and got onto the airplane. On his chair back, far away in a food court, rested his bag with his Gameboy Pocket and several games, including James Bond 007.

So, now that he is older and much more well-versed in not just writing, but playing games and understanding what is happening during them. So, when he tripped over this game in a thrift store, his wallet had magically leaped onto the counter, opened itself, and paid for the game before he could possibly protest.

Excited, the GBA SP in his hands, he booted this game up, and starting tearing through it. So let's begin screwing around in the name of nostalgia science! 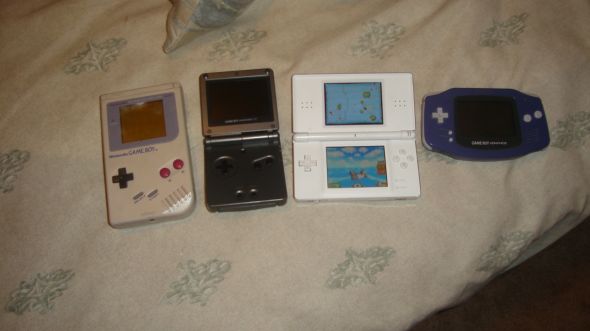 See that big clunky block on the left? Yeah, that.

James Bond 007 is a top-down action, almost adventure, game for the Nintendo Gameboy. Let me preface the review to say this game is old. This was before handhelds really had color, much less resolutions in the several hundreds. That being said, let's continue.

JB007 is a fun little top-down Gameboy game that plays faintly with the James Bond universe, and is a little bit of a brief touch on it, but really pegs it for how short the game is. It tells a story, a very short one, but really hits home the Bond world in a very 8-bit, monochromatic kinda way.

The gameplay itself maps certain functions out of the A and B buttons (Remember the days when handhelds had two buttons, and no shoulders?), and runs with these particularly well. The Gameplay walks Bond through a couple of, admittedly disorienting, missions across the world Europe and outlying areas. Very action oriented, it's sort of a mixture between faux-3D top-down adventure games and action top-down 2D games.

Gameplay features around setting actions to the A and B buttons, much like LoZ:Link's Awakening, making full use of Bond's arsenal of Kung-Fu Capabilities and Q's handy gadgetry. The gameplay is very search-aimlessly-oriented, finding items that will have use later, or forcing you to backtrack until you find it. As such, it's a fun romp, regardless of how simple it is.

to have dialog
boxes with more

The sound, comically laughable by today's standards, really makes the best use of Game Boy's sound I've ever heard. To this day, my head trumpets the Game Boy's Bond chime sounds whenever I find something I've been looking for (usually LEGOs, oddly enough). It establishes a mood, runs with it, and really immerses you despite the colorless low-resolution. I would highly rate sound if I had a thing for numbers, but safe to say it's among the best I've ever heard from a Game Boy.

Frankly, this seems a little like I'm trawling around nostalgia lane, painting the game a little better than it actually is. If you guess that, then you'd be right. For it's time, it's a fairly entertaining game that maintains deliciously terrible dialog and goofy action scenes. If you're looking for a serious game, then there are many, many new generation games that are much better for this type of thing.

If you like Game Boy games, memory lane, and really cheesy dialog and terribly simplistic action, then you are most certainly in the right place. If you want a serious, down and dirty game that really gives you Bond without jilting you of the Bond Experience, then shoot for another game. (Problably Nightfire [http://www.gamerankings.com/htmlpages2/561311.asp?q=Nightfire] or Golden Eye [http://www.gamerankings.com/htmlpages2/197462.asp?q=Goldeneye]).

Don't get me wrong, if I didn't absolutely love this game, I wouldn't have written a review for it. It's an old game, and certainly a very small audience that would actually enjoy it, so I don't feel like I'm amusing anyone but myself by writing this. As such, if you enjoy cheese in all of it's awful excellence, then you should find this game and play around with it. It's achieved Repercussions Of Evil [http://www.fanfiction.net/s/836450/1/DOOM_Repercussions_of_Evil] levels of excellence, while still being accurate to the Bond universe.

[HEADING=2]Verdict[/HEADING]
Buy It. If it's not your thing, then you've jilted yourself out of a whole 25 cents, so you probably won't miss it. If you enjoy it, then it's definitely a whole quarter well spent. If you can find it, pick it up. I liked it, and you probably would too.
Z

Oh wow this review takes me back. I loved that game. For the past year or so I have been half heartily searching for it to no avail.

I find this review satisfying, not satisfying. Actually it was good, but you do not have a picture of Sean Connery. Therefore, you lost some point Mr. Classic.

Note* Actually, I liked the review.

Out of interest how did you take the screenshots?