I'm no old-school gamer. The first game I played was Fifa 2000. I didn't actually think then that I would play any games other than sports ones. That was before I got Call Of Duty, the first FPS in my mind that shaped me into the rabid Infinity Ward fanboy I am today.

I get mad when people mention "dedicated servers" but it is nothing compared to my anger when people diss Call Of Duty. This whole retrospective (there will be other reviews along the way) is dedicated to that game, the underappreciated WW2 shooter buried under the Modern Warfare franchise.

A little history - Call Of Duty was the first title of then newcomer studio Infinity Ward. The studio was comprised of former Medal Of Honor developers and, thus, shared similar concepts to MOH. The game was a great success for the publisher Activision, so great, that it got an add-on, a spin-off and a sequel.

Ign.com said:
The presentation is a bit outdated
Click to expand...

Eurogamer.net said:
Call of Duty Classic is, in most aspects, simply a clunkier version of what you can now do in Modern Warfare 2 (or, if you want to be pedantic, World at War) with a lot more polish and audacity.
Click to expand...

I don't have too much problems with these reviews, per say, but "outdated"? Well, no fucking shit. It's called Classic for a reason.

With all of that in mind, let's dig into Call Of Duty as I remember it from 2003.

The game is quite simple. It's a WW2 shooter, not that different from any MOH game. It's as authentic as it gets - healthpacks, four difficulty settings and no storyline apart from pre-mission diary pages. Yet with little to no presentation, Call Of Duty manages to come up with memorable characters and a great amount of variety.

What keeps every Infinity Ward game special is still here. The direction. Those games are as close to a movie as you can get without actually making an interactive movie. The moments are unbelievably memorable. It has car chases, Stalingrad, tank battles, crazy training routes and the taking of the Reichstag.

The characters would be best described as a "drone with a nametag" but for some bizarre reason they all stuck in my head forever. Maybe it's the voiceacting by Giovanni Ribisi that made me try to save Pvt. Elder over and over again.

The game has multiple protagonists and three main campaigns: The Americans, The British and The Russians. The gameplay for the Americans is your standard shooter affair. You fight in trenches, outrun tanks, blow shit up, all that great stuff. While you play as the British, you have considerably less allies and the missions are more about paratroopers and all great stealthy stuff which doesn't really involve stealthy stuff. As for the Russian campaing, it has a lot of open fights and, in my opinion, the strongest of them all.

It's not the most challenging game, to say the least. Many experienced players will breathe through the Veteran mode in no time. There is, of course, the quicksave feature which really made things easier. The A.I. is also not too smart but really appropriate for the time.

The game isn't perfect, of course. The solo missions, for example, remind me of boring corridor shooters and they're a tad too difficult. The historical accuracy is also all over the map but, let's be honest, who needs accuracy in a Call Of Duty game?

The graphics were a bit dated ever for the time but they're compensated with great animations and a huge attention to details. Also, it's not all grey and brown like some shooters today like it.

The music works for the most part and the sound is mindblowing. It wouldn't be the same without it. When it comes to recording weapon sounds or shellshock effects, IW really know what they're doing.

- Not too challenging
- Not too good-looking

[HEADING=2] Verdict: [/HEADING]It's not perfect but Call Of Duty is simply a great game. If you care about the roots of the COD series or just like FPSs in general, get it. Don't let the looks fool you - Call Of Duty is as good as it has ever been.

EDIT: The hardest review I've ever had to make. I really really want to do this game justice.

I agree the first CoD was pretty amazing. I liked it much more than all its sequels.

blue_guy said:
I agree the first CoD was pretty amazing. I liked it much more than all its sequels.
Click to expand...

If I think about it, my favorite is probably the second one.
Life regeneration just suits me better. 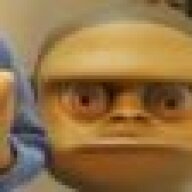 mmm id still rathere the 2nd one for its multyplayer

siffty said:
mmm id still rathere the 2nd one for its multyplayer
Click to expand...