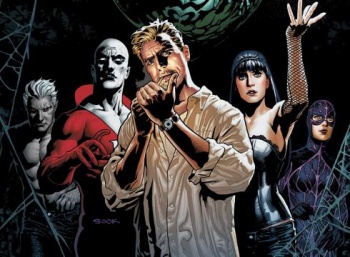 According to the rumor mill, Warner Bros is still developing Justice League Dark and is considering Colin Farrell for the role of John Constantine.

It's taking a while, but DC Comics is slowly building up its superhero film line-up with <a href=http://www.escapistmagazine.com/news/view/161380-Batman-v-Superman-Dark-of-Justice-Producer-Says-Finished-Film-Wont-Be-Overstuffed#&gid=gallery_5019&pid=1>Batman v Superman and <a href=http://www.escapistmagazine.com/news/view/141550-Suicide-Squad-Comic-Con-Trailer-Released>Suicide Squad. But once those movies are finished, this cinematic universe might get a lot stranger thanks to <a href=http://www.escapistmagazine.com/news/view/121386-Guillermo-del-Toro-Pitching-a-DC-Supernatural-Movie>Justice League Dark. Originally pitched by Guillermo del Toro, Justice League Dark would bring together John Constantine, Swamp Thing, Etrigan the Demon, and other magical superheroes to fight threats which the Justice League could not. While del Toro is no longer attached, Warner Bros. is still developing the project based on characters included in his original script. And if the latest rumors are accurate, Warner Bros. has a few specific actors in mind, including Fantastic Beasts and Where to Find Them's Colin Farrell as John Constantine.

If Justice League Dark is completed, it would be the third live-action version of John Constantine we've seen in almost a decade. Keanu Reeve's Constantine made drastic changes to the iconic magician, but all things considered, it was still a really fun supernatural action film. More recently, Matt Ryan returned the character to his roots on NBC's Constantine, and continues his performance <a href=http://www.escapistmagazine.com/news/view/141951-Matt-Ryan-Returns-As-Constantine-In-DC-Universe-Arrow-Season-4>on the set of Arrow.

According to sources at Latino Review, both Colin Farrell and Ewan McGregor have been approached for Constantine's role. Both would offer strong performances, but I have to admit, a blonde-haired Farrell in a trenchcoat could absolutely pull of Constantine's look. But Farrell might still have a Justice League Dark position if Constantine doesn't work out: These same sources add the actor who doesn't get the role could play as Jason Blood, Etrigan's human host.

No other lead character has been cast, but there are certainly several other interesting prospects. Guillermo del Toro originally wanted Ron Pearlman to take on Swamp Thing, and hopefully Dark's current producers agree. Spectre's Monica Bellucci is apparently a strong candidate for the fortune-telling Madame Xanadu. Sources have also stated that Warner Bros. wants a comedic presence for the ghostly Deadman, and a hispanic or black actress for the powerful mage Zatanna.

Of course, all these casting decisions are fully in deniable rumor territory until Warner Bros. provides an official statement. All the same, the very possibility that Vertigo's characters would appear together on theater screens is intriguing, and one we'll pay close attention to in the coming months.

colin farrel as constantine? interesting. wont be as good as matt ryan tho i think.


Fanghawk said:
a hispanic or black actress for the powerful mage Zatanna.
Click to expand...

well. that's gonna cause a shitstorm.

I thought Matt Ryan was already signed on to play the movie version?

Veldie said:
I thought Matt Ryan was already signed on to play the movie version?

Matt Ryan's John Constantine is now firmly entrenched in the Arrow-verse on TV, so it may not be him, depending on if/how DC will connect the TV side of things with the movies. The only DC live-action show they said is confirmed to tie in to their movies is the not-yet-greenlit KRYPTON.

Not sure how I feel about Zatanna not being white for this movie.

Meeh Im not sure hes the best, but his Daredevil role was definitely the only thing watchable in that film.

Veldie said:
I thought Matt Ryan was already signed on to play the movie version?

They've veryt clearly divided their TV and movie universes, though. For better or worse, it seems unlikely that there'll be much in the way of crossovers.


piscian said:
Meeh Im not sure hes the best, but his Daredevil role was definitely the only thing watchable in that film.
Click to expand...

Yeah, but only because he was utterly chewing the scenery and going full Raul Julia as M Bison on it. Hopefully, this movie isn't so bad that that's merited.
M

DC's plan is, apparently, that ONE of these shitty avengers knockoffs will somehow work, damn it!

I cant look at colin farrel without thinking of bullseye from daredevil (the movie), so please no.

Big Constantine fan here... although I've yet to read his 'New 52' stories.

Colin Farrell would do fine, by my opinion. Matt Ryan did a fine job, but let's face it, Farrell would do better. Don't judge him by Daredevil, elsewise you'd have have to dismiss Affleck, Jennifer Garner, and Michael Clarke goddamned Duncan. So that's ignoring a lot of talent.

Frankly, I felt that Keanu did a great job portraying Constantine on screen way back when, even if the movie was a bit odd. It was certainly better than the TV series. Matt Ryan is by no means bad, but I wouldn't be sad to see him go.

I could see Farrell as Constantine. I would focus not in Bullseye, but his character on True Detective. He is certainly a man than can pull off the beat down, broken bird, full of guilt and self loathing angle of the character.

Ewan McGregor could be pretty good as Blood. I am not much of a fan of the character, so he sounds decent for as little as I know.

I have no problem with Zatanna being Hispanic woman. She has Italian ancestry, so it makes some sense.

Fanghawk said:
While del Toro is no longer attached
Click to expand...

Why can't anyone just let the guy make movies? When you think about it, the guy has had a hand in setting up some of the biggest movies we've had lately.

OT: This movie sounds an awful lot like DC's attempt to counter The Guardians of the Galaxy. I'd kind of like it to be wildly successful (while the other dc movies flop), if only because all of the stupid dc decision makers will be left scratching their heads and wondering what just happened.

I never thought I'd see Deadman or Zatanna on the big screen. Hopefully whoever they cast as Constantine will be good enough to undo my first exposure to the character: Keanu Reeves.

mrverbal said:
DC's plan is, apparently, that ONE of these shitty avengers knockoffs will somehow work, damn it!
Click to expand...

Yeah, you're gonna be one of those guys who thinks Darkseid and Brainiac are ripoffs of Thanos and Ultron, aren't you.