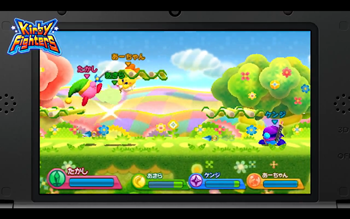 Kirby Triple Deluxe lets you fight others to test the strength of copy abilities and sidescroll to music with King Dedede.

The latest Kirby game looks very much like its predecessors, but Kirby Triple Deluxe will have other play modes, Nintendo announced. The 3DS game will include a fighting play mode and a rhythm play mode along with all of the new copy abilities for Kirby to inhale.

The fighting mode of Kirby Triple Deluxe is a four-player fighting game akin to Super Smash Bros. Players each control a Kirby with different copy abilities to fight the others. Nintendo CEO Satoru Iwata intends this mode to attempt to answer the question, "Which copy ability is the most powerful of them all?" Within Kirby games, the best copy ability often depends on the situation, but this mode will test how different players can use various abilities whether or not that be for raw power.

Players control King Dedede in a rhythm game. Unlike most rhythm games, which often have the player only pressing certain buttons in time to the music, this one is a sidescroller, and players will have to stay in rhythm to avoid any hazards in King Dedede's way. The music will include "several familiar Kirby tunes," Iwata said in the Nintendo Direct presentation.

Kirby has a new Hyper Nova ability, a much stronger inhale ability that Kirby can use to affect the environment and pass obstacles. Also noted in the Nintendo Direct presentation was the presentation of the stage. Like previous Kirby titles, Kirby Triple Deluxe is a sidescroller, but the background and foreground will both play a role in the 3DS title. Instead of moving only left to right, Kirby can move into the background where the stage continues.

Kirby Triple Deluxe is set to launch next year on the 3DS as the first Kirby 3DS game.

Loving the look of this game. Then again it is a Kirby game, my favourite series, I love the look of all of them. The Kirby fighting game part looks and sounds epic, particuarly the Dedede Stadium stage. I wish you were fighting as the Super Star partners instead of other Kirby's though, that would have made it even better (except T.A.G. would have to be banned for being too OP).

TizzytheTormentor said:
Kirby fighting game? Against other players?
[HEADING=2]Freaking sold![/HEADING]
Is it online? I dont have any friends around who have 3DS's, let alone the interest in this game. Been waiting for a Kirby game on 3DS for a while, so this is some great news.
Click to expand...

Considering the infrastructure Nintendo finally has in place, I can't imagine it would only be local.

OT: This game can't release soon enough. It's not often I buy games on release anymore, but a Kirby game on the 3DS? Hell yeah. Don't know how much I'd play the extra modes, but who knows?

shrekfan246 said:
Considering the infrastructure Nintendo finally has in place, I can't imagine it would only be local.
Click to expand...

Well then again, look at Super Mario 3D World, a game that has some online features but decided to not implement the idea that a game can have both a local and online multiplayer aspect to it. I mean the game would literally do just fine if it had both.