Leaked Screenshot Suggests Next Assassin's Creed is In Egypt

Leaked Screenshot Suggests Next Assassin's Creed is In Egypt

//cdn.themis-media.com/media/global/images/library/deriv/1385/1385323.png
A leaked screenshots suggests that the upcoming Assassin's Creed: Empire will be set in ancient Egypt.

Another year, another Assassin's Creed. This time it's Assassin's Creed: Empire, and Ubisoft have dropped precious little information. However, a leaked screenshot, courtesy of an anonymous reddit user [https://www.reddit.com/r/Assassins_creed/comments/5w3uvd/you_know_what_this_is/] has seemingly confirmed the setting for the game as ancient Egypt.

The image, which you can see to the right, shows our titular assassin clad in some ancient Egyptian garb, about to enter what appears to be a pyramid, or some other sort of stone structure. He bears the assassin's insignia on his shield. The code at the bottom of the image reads "GIZA", and the small image above the "5m" distance tracker looks quite a bit like a sarcophagus.

Rumors are suggesting that this new Assassin's Creed will be a "soft reboot" of the franchise, and will take things back to basics. 2016 was the first year in a long time that Ubisoft did not release a new Assassin's Creed title, citing the need "to push the series' boundaries forward and create the best possible game." 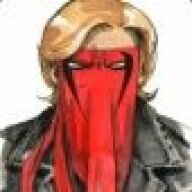 Hmm. It does look Ancient Egyptian (except the shield and sword, which look Greek). If so, then why is it called AC: Empire? Ancient Egypt is always refered to as a 'Kingdom', never an 'Empire'. You'd have to presume an empire features in some way...

Of course, several empires conquered Egypt at various points, notably the Romans and the Macedonians of Alexander the Great (which might explain the Greek weaponry). Plus a wider Mediterranian map would let them bring back the ship!

They said it would be set in Egypt last year...

...citing the need "to push the series' boundaries forward and create the best possible game."
Click to expand...

You'd think they would do that by actually progressing the original story with Desmond, you know the whole plot that has kinda just been pushed to the wayside, and move on rather than keep regurgitating the same game in a different time period. I honestly can't tell anything really from the image as it's too small and the original reddit link leads to a 404 page.
Show hidden low quality content
You must log in or register to reply here.
Share:
Facebook Twitter Reddit Pinterest Tumblr WhatsApp Email Link
Top Bottom