Aside of a few jokes, this episode was bad, with the worst being that Korra gets over her phobia in 5 minutes after a 2 minute talk and seeing a big tree. WTF?

why does everyone hate Meelo? he's awesome!

I hope he gets a comic book to continue his crazy antics, a story where Meelo and his crazy uncle go on an adventure would be great. I like the episode and despite a bunch of people saying that Korra got over her phobias in 2 minutes you need to remember that Toph had been training/helping her for the last 6 months. The crazy fan guy said it had been 6 months since he last saw her

GZGoten said:
why does everyone hate Meelo? he's awesome!
Click to expand...

And to be clear, I love Meelo. He's fantastic. Like I said, I've realized he's better in small doses, not for a full episode. 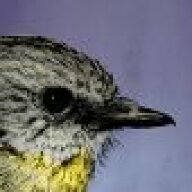 inu-kun said:
Aside of a few jokes, this episode was bad, with the worst being that Korra gets over her phobia in 5 minutes after a 2 minute talk and seeing a big tree. WTF?
Click to expand...

Korra did spend roughly 3-180 days with Toph, I guess we could go with an average of those two numbers divided by half and not be that far off. (Walking on foot takes time.) Not to mention that during her 'Earth Bender Brawls,' we did not see any of those Kuvira banners that have apparently become a rather common place in the towns and villages of the former Earth Kingdom.

As for Korra, she has always been sort of a 'punch-first think-later' kind of character. So, it has to have been few days of absolute nothing for her to grow bored enough to start thinking things through. And apparently Korra still needed Toph to trick her into the right direction, not to mention some general help from spirits and the swamp itself.

And the appearance of those air bender kids is important, as Korra treats them as the siblings she never had.

And sure, the whole process could have taken a lot more screen time than that 7~ minutes. But what would that have been, an episode dedicated for Korra growing increasingly bored until the point that picking up extra slimy mushrooms seems like a fun thing to do? I suppose she could have bashed her head against trees and what not, but would that really be funny beyond the first minute? (Kind of reminds me of the episode where Aang refused/was unable to sleep before the attack on Fire Nation.)
Show hidden low quality content
You must log in or register to reply here.
Share:
Facebook Twitter Reddit Pinterest Tumblr WhatsApp Email Link
Top Bottom