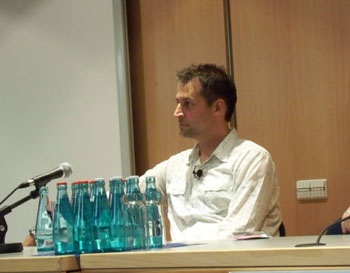 Some of the industry's heaviest hitters gathered together at the Games Convention in Leipzig to discuss not only how to make a best selling game, but also the tricky process of defining one.

Before the craziness of the Games Convention in Leipzig is unleashed on the salivating public on Thursday, the developers themselves gather in the smaller Conference Center Leipzig next door for a bit of networking, a bit more beer, and several panels and keynote sessions. Among the sessions and speakers that piqued my interest was the Best-Selling Games panel, including several devs who've been part of some best-selling games' teams. As we enter into the hallowed Holiday Season, the time when the majority of the AAA games are launching, I thought I'd pop in and try to understand what those devs worked toward, what were their thoughts on creating the Big Ones.

Moderator Phil Elliot (GamesIndustry.biz) started with an appropriate question to set the tone and define the parameters: How does one define a best-selling game? But while it's an appropriate place to start, it's also one of the most difficult questions to answer, following only, "How do you make a best-seller?"

Acclaim's Dave Perry (pictured), fresh out of his prior session, delivering Tuesday's afternoon keynote on "Preparing for the Future," started things off by suggesting it's something of which fans want more - they want action figures, TV series, comics. Chris Taylor of Gas Powered Games suggested perhaps money-making wasn't the best indicator, calling forth the example of Scrabulous on Facebook - everyone was playing it, but it's not making money. Having the "best gameplay evar" isn't really a good metric either, demonstrated by Taylor's second example: Deerhunter.

"If everyone's playing it, it's a hit," stated Taylor. Well, that does feel rather obvious, when you put it like that. So, it's not money that marks a best-seller. And it's not really necessarily the best game, either. Epic Games' president Mike Capps chimed in at this point, recalling, "I heard best-selling defined by a publisher as selling 700,000 units." Rather arbitrarily specific, it seems. But, as I mentioned before, it's the second-hardest question to ask on this subject; no one has a good answer. Unless of course we want to label it "officially" with an arbitrary number, in the vein of Unknown Publisher.

Continuing the topic of great gameplay not being an automatic Win Button, Elliot brought up great games that don't sell, citing an example in Shadow of the Colossus. Capps offered a relatively concise explanation: marketing and/or accessibility. Visibility is a difficult thing to achieve - the games information channels are very cluttered, and sometimes it's hard to know who to trust. But more, he talked about accessibility. Referencing Elliot's example of Shadow, Capps described how the new-to-gaming player might see it, "You climb up on the wookie-rock thing? What? It's not really very intuitive."

"You gotta go wide with it," agreed Perry, suggesting that designing for broad target audiences is the ticket to success. Taylor mentioned how designing games for arcades was different, stating every game had to have something new and creative. Derivative stuff didn't fly when trying to draw people in amongst the flashing lights of the arcade. But now, games have become so complex, developers have such a mindset of needing to create something new every time, that it's gotten so complicated. "People need a place to plug into the game," he said, explaining the need for something familiar for players. Again, accessibility was the key.

At this point, the floor was open for questions from the audience. The first brave soul to take the mic asked the question that may as well have been how do you catch lightning in a bottle? "How do you create these games? Do you know when you are designing it?"

This opened the door to the guys giving a little detail about their design processes, which varied per studio, and even per game within studio as one can imagine: get feedback from the community; no, people don't know what they really want; put your best people on it and polish polish, polish. But there was a common theme of je ne sais quoi in the process. Chris Taylor really summed the whole thing well; all these things are great - feedback from the players, polish, great talent - and will put you well on your way to hats made of money, but there's no substitute for seeing a need or desire for something before anyone else. Stated Taylor, "People who see that are geniuses."

That's odd, I assumed they broke their numbers like Hollywood does. You don't look at the final gross income, that has too many variables jumbled in like opening weekend figures, post-critical fallout, and the ever curious pirated figures. Breaking it into number of people playing is just as problematic as looking at the final costs check.

There was a Slate article...can't remember it but it caused a big flame war with movie nerds, claiming that the belief that rotten tomatoes scores don't affect film income is a mis-calculation. He broke films down into number of screens they were on, number of people going to see it per screen, and then calculated the income they made per screen. Then he turned that into an average and showed a correlation between negative scores and films that raked in low amounts of cash per screen.

I wonder if the same goes for consoles...you'd need to factor in some other stuff to get the figure right. Number of installations? Xbox Live usage? I'll have to think about this for a while, but it shouldn't be that hard to determine a best-selling game based on the ratio of consoles in the market and further boosts from downloads.
Show hidden low quality content
You must log in or register to reply here.
Share:
Facebook Twitter Reddit Pinterest Tumblr WhatsApp Email Link
Top Bottom