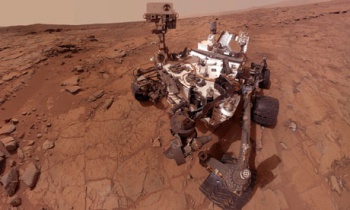 Few things have excited the scientific community in recent years quite like <a href=http://www.escapistmagazine.com/news/view/128212-Mars-Is-Practically-Drenched-in-Water>finding water on planets like Mars. The only trouble is we haven't discovered oceans, lakes, or even puddles - we've just found <a href=http://www.escapistmagazine.com/news/view/139143-NASA-Curiosity-Rover-Mars-Water>the traces of liquid water that used to exist thousands of years ago. But a new report suggests that liquid water can be found on Mars after all - you just need to look in the right place at key times of year.

NASA's major focus right now is the Gale Crate, a massive landmark that's being explored by our Curiosity Rover. While the Crater doesn't contain liquid water - <a href=http://www.escapistmagazine.com/news/view/134044-Liquid-Water-on-Mars-May-Have-Existed-as-Recently-as-200-000-Years-Ago>not right now anyway - it is showing signs that thin layers of salt water can form and evaporate in the right conditions. That's thanks to salts in the soil called percholorates, which absorb water from the atmosphere and lower its freezing point dramatically.

"These can decrease the freezing point of water by more than 70 degrees," Morten Bo Madsen of the University of Copenhagen explained. "And they attract water quite violently. This can result in salty water moving up and down the surface."

That's important, because water on Mars doesn't usually have a liquid state - it evaporates immediately by skipping from solid to gaseous states. But these percholorates might allow tiny amounts of liquid to form that evaporate more slowly than usual. Based on Curiosity's weather monitoring equipment, Madsen believes this phenomenon might occur every day during the Martian winter and spring, especially near the polar regions. Curiosity and the Gale Crater, however, are located on the equator.

That's not to say we're at the puddle stage yet either. "There's so little water that you can't even see it visibly," Madsen points out. But the evidence does line up with research suggesting that Mars once had flowing water, while positing the planet <a href=http://www.escapistmagazine.com/news/view/140391-NASA-Believes-Alien-Life-Will-Be-Found-In-Next-10-To-20-Years>was once very hospitable to life.

So we shouldn't be surprised if we land on Mars during winter and start seeing the odd droplet on our space boots.

Great, there's liquid water but it's filled with percholorates...

Great, the future generation of Mars colonists will be fat, have a lower IQ, and high blood pressure. Potentially aplastic anemia to boot.