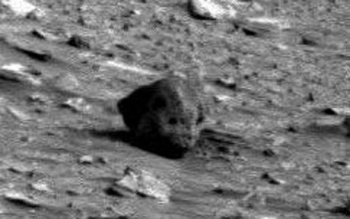 Mars is full of aliens! Or, at least, that's what a wide swath of Internet users are electronically shouting after NASA released a recent photo of a skull-shaped rock.

The stone, pictured at right, seems to have ridges and pits that many argue resemble eye sockets and a nasal cavity.

As is their wont, the legions of the 'net are now abuzz [http://www.telegraph.co.uk/scienceandtechnology/science/sciencenews/5255394/Alien-skull-spotted-on-Mars.html], claiming the image as indisputable proof that aliens are living on the red planet, and possibly planning to eat our brains

Researchers at NASA have yet to comment on the mysterious stone, presumably because they have better things to do than argue with nerds.

(On the off chance that one of our new alien overlords is reading this, I was totally kidding. Susan made me write all this blasphemy. Eat her first.

And, might I add, you have lovely cranial sockets.)

Doctor Manhattan was busy exterminating the subterranean denizens of Mars; looks like one managed to escape to the surface.


xmetatr0nx said:
I dont think aliens would know what strawberries taste like. Anyone remember the "face" on the surface of mars thing? God did everyone make a big ass deal about that. Although i tend to agree all the way about NASA having better things to do then arguing with nerds.
Click to expand...

Agreed. I doubt i'll live long enough to watch the first fleet of the Terran army departing to explore the vast universe. ;(

It looks more like a space rat to me.

This is even less convincing the the "Face of Mars", or Martian Bigfoot. 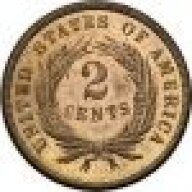 I think the nerds are just projecting. and if the alien overlords do come, I'll just introduce them to "Smith" and "Wesson", and maybe even "Mr. Mossberg". ITS CALLED EVOLUTION, ALIEN BITCHES!

Wow, Bungie is getting creative. 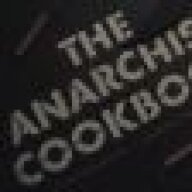 Dinosaurs, robots that can taste people, and now aliens!? All in one week!?


Thats it. We are definitely screwed.

So did I! But then again they were really into astronomy.

First thought I had was they'd found Orville's skull

TMAN10112 said:
Dinosaurs, robots that can taste people, and now aliens!? All in one week!?


Thats it. We are definitely screwed.
Click to expand...

I misread this title, I thought it said "Martian rock resembles SKRULL".

Which would be freakier.
F

We are all wrong, Big foot and his pal the loch ness monster have the ability to travel space on their tricked out pogo sticks. One day bouncing around in space Big foot ate one to many Super-Mega-Deluxe-Kickass Tacos and could not find a bathroom, so he took loch nesses advice and just used Mars to drop a stink bomb, the "skull", so they could continue on to Pluto to chill with the cthulhu. 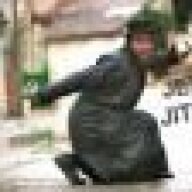 Its a rock... I do not see how it really resembles a skull.
E

Considering that it just barely looks like a skull, I think I'm safe with betting that it's just a rock. But then again, that probably is what a Martian skull would be shaped like... 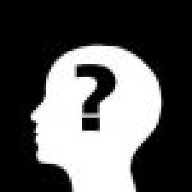