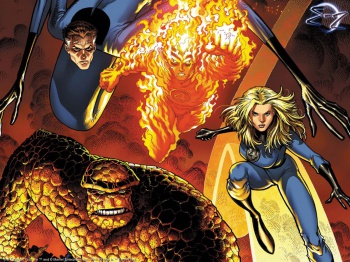 If the rumor mill is accurate, Fox returned its Fantastic Four license to Marvel in exchange for X-Men's TV rights.

Update: Current statements <a href=https://twitter.com/Breznican/status/654703600514396161>from both Marvel and Fox state that Fantastic Four's film rights still belong to Fox for the time being. That said, <a href=http://www.escapistmagazine.com/news/view/138994-Sony-Hack-Reveals-Spider-Man-Almost-Crossed-Over-For-Avengers-And-Civil-War>Spider-Man went through a similar back-and-forth for months, so who knows? Perhaps this will change in the near future.

According to the rumor, Fox and Marvel came to an agreement: Marvel would get Fantastic Four's film rights in exchange for X-Men's TV rights. While the information hasn't been confirmed, it does match recent superhero news. Fox just announced it would produce Legion and Hellfire, both based on the X-Men universe. Fantastic Four's associated characters and villains would return to Marvel's wheelhouse if accurate.

While we don't know if this deal is true, it makes an incredible amount of sense for both parties. X-Men is the only Marvel franchise to qualify as a non-Marvel Studios success, so Fox isn't about to give the rights back. Meanwhile, Marvel hasn't had much luck with televised X-Men projects - Wolverine and the X-Men was the last great example, but it didn't have the audience to warrant a second season. Then there's Fantastic Four, which <a href=http://www.escapistmagazine.com/articles/view/moviesandtv/reviews/cinemarter/14417-Fantastic-Four>suffered an abysmal film reboot earlier this year that Fox wants to distance itself from. And Marvel is very capable of spinning success stories from superhero franchises few see the appeal in.

Until we learn specifics, what I'm curious about is how the Fantastic Four could possibly join the MCU when it's already filled with super-geniuses. Here's my theory: Marvel's First Family disappeared into a dimensional portal in the 1960s, only to return in present day with superpowers. Ideally that would bypass spending half the film on another origin story, while dropping them into a new world filled with Avengers and aliens. Whatever happens, I find myself eagerly awaiting more news on the nature of this deal.

Yesssssss. I honestly don't care much for the Fantastic Four, but Doom is one of the best villains ever created, and Silver Surfer is pretty cool too.

This is the best possible outcome for everyone. I can't wait to see how it turns out.

Oh thank god. Fantfourstic is by far the worst superhero film I've seen, its gonna be great for the MCU to welcome in the likes of Doom and Galactus. Oh, and the Fantastic Four themselves, thats good I guess.

Hasn't this rumour been around a few times before now?

Shane Ledford said:
Yesssssss. I honestly don't care much for the Fantastic Four, but Doom is one of the best villains ever created, and Silver Surfer is pretty cool too.
Click to expand...

My exact thoughts. Also Galactus can be pretty awesome.

why is Real Time Strategy one of the tags?

english isnt my first language but isnt the tittle supposed to say might instead of may?

martyrdrebel27 said:
why is Real Time Strategy one of the tags?
Click to expand...

Clearly because of the tense struggle where Fox and Marvel battled using their franchises as in-game units....

Nah, I have no idea where that came from! But it's been pulled.

I hope it's true, Fox have had enough attempts to get it right. Still I'm not sure I could make the Fantastic Four interesting, they are fairly dull but have amazing villains, still if anyone can do it marvel probably knows the people to make it work.


I'd begin with the four on the way to the flight, instead of being shield-less this is to test a new type of shield against an unusual radiation storm which if successful will allow safer galactic travel , but it's tampered with by an agent of Latveria who sacrifices himself to damage the shield, the ship is caught in the storm and the four bombarded with the radiation.

Shifting forward five years, we find that in the aftermath of the crash and gaining powers, Ben Grimm disappeared unable to cope with his new form, with his career ruined and his friend transformed into a rock monster Reed's guilt over the accident has caused him to bury himself in his work and investigate the crash, he also buys the Baxter Building to keep himself Johnny and Sue out of the public eye and away from scrutiny.

eventually after goading by Johnny, Reed breaks into the hanger where the wreckage of the ship was stored (by Shield) and discovers a Latverian embassy badge, as well as that Johnny and Sue had followed him, before he can follow up on the new evidence, the Three are attacked by a giant orange rock monster which wrecks the warehouse, they are forced to fight the creature, but it eventually breaks down into rubble. a random remark about the creature looking like Ben, leads Reed to conclude that the creature was an imperfect clone and that Ben must be being held somewhere in the secretive nation.

The next day seeking travel rights they head to the Latverian embassy, they are greeted by the visiting ruler of the Nation, Victor Von Doom, sans mask currently, who surprises Reed with his knowledge of science, entertaining his guests Doom takes them to dinner to discuss there interest in his nation, there he drugs the three.

waking up in a cell beneath the embassy, Reed, Johnny and Sue are reunited with Ben, and Doom tells Reed that he is glad the family survived being bathed in the radiation, he explains that after seeing the effects on Bruce Banner of extreme gamma radiation he wanted to see what the effect of a radiation storm he had been tracking would have on humans, and that with all four of them here he can now create an army of unstoppable super soldiers.

working together the family break out and confront Doom before he can finish his tests, unleashing another incomplete Thing clone, the family are forced outside, the unstable clone begins to grow to giant size, and the family fight the giant monster, eventually defeating it.

in the aftermath the family try to have Doom arrested, his face scarred in the escape, he reminds the gathered people that they can do nothing as he is a foreign dignitary and has immunity.
They are accepted as heroes, Johnny gives them the name Fantastic Four as Doom flees the country.

Post Credits: Doom on the plane his face is bandaged, as one of his staff informs him the computer has finished tracking the source of the radiation storm, a silver being, and it's on it's way to earth.

Covarr said:
This is the best possible outcome for everyone. I can't wait to see how it turns out.
Click to expand...

Sadly the world and characters surrounding the FF are far more intriguing than the FF themselves. Hopefully Marvel will just gut FF of its other IPs and the archaic and unpopular quartet can just fade into the background.

Good. X-Men and the other Marvel Universe should remain separate, the two worlds never meshed well. I don't care much about the Fantastic 4, but I'd love for Doom to show up as a Big Bad. I only hope they can do him justice, no live action version has managed it well yet.

FF would be great as a tv show as it has the drama of the family dynamics and of course crazy stuff. I just dont think Fox will take risks with the Xmen show. It has so much scope for crazy mutants, crazy powers and a tons of great story opportunities. But i dont think they will take full advantage of the xmen property.

Ukomba said:
Good. X-Men and the other Marvel Universe should remain separate, the two worlds never meshed well. I don't care much about the Fantastic 4, but I'd love for Doom to show up as a Big Bad. I only hope they can do him justice, no live action version has managed it well yet.
Click to expand...

I agree completely. As a kid I read X-Men comics, and until Marvel's first big success with Iron Man at the theaters the X-Men were the only Marvel property I really cared about. But 8 years after Ironman now that I'm fully invested in the Marvel Cinematic Universe... introducing the X-Men or more specifically 'mutants' into it just makes things waaaay to crowded. Also with all the world building that's been done for the MCU I'm not sure how you'd suddenly introduce the concept that mutants: X-Men, Magneto, Sentinel program, etc have been sharing the same space as Shield/Avengers/etc all along.

Something Amyss said:
Hasn't this rumour been around a few times before now?
Click to expand...

I know I posted a topic in the Off-Topic discussion about this earlier today.

Something Amyss said:
Hasn't this rumour been around a few times before now?
Click to expand...

I know I posted a topic in the Off-Topic discussion about this earlier today.
Click to expand...

I haven't browsed any of the forums. I mean this same general rumour from probably months ago. The reason for the specxulation seems to change, but it's always something similar.
P

I hope it's true, that gives Marvel the rights back to their most interesting vilains which is absolutely important.

Update: Current statements from both Marvel and Fox state that Fantastic Four's film rights still belong to Fox for the time being. That said, Spider-Man went through a similar back-and-forth for months, so who knows? Perhaps that will change in the near future.
Click to expand...

This is exactly why I hate "maybe's" being passed off as news. Journalism right? Jesus fucking christ.

You know, if what it took for marvel to get FF back was a slight extension to the scope of the rights fox has with the xmen, I think they'd be both getting a good deal.

Xmen is the only franchise fox has managed any success with and exploring that success as an Xmen cinematic universe would be more beneficial than holding on to a property they just can't get going.
Certainly more beneficial than hoping one day to shove the FF and Xmen together to create an imitation of marvel studios success in their cinematic universe.