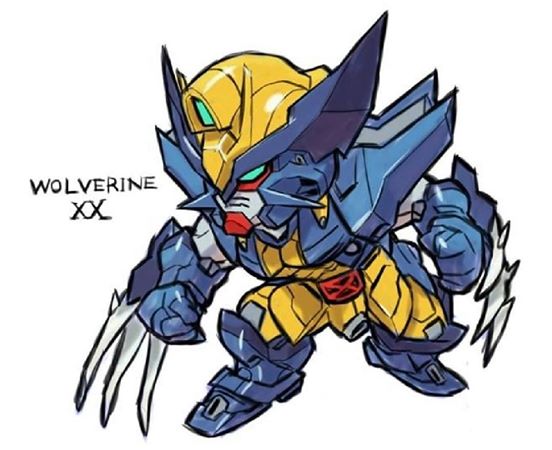 Fan artist Aburaya Tonbi has created a gallery of SD-style Gundams based on Marvel's superheroes.

If there's one property that needs to be more popular in North America, it's Gundam. A cultural icon in its native land of Japan, the franchise won some stalwart fans (present company included) when it first hit American airwaves via Cartoon Network's <a href=https://www.youtube.com/watch?v=WVcCB4fze94>Toonami block back in the early 2000s. Sadly, despite some success, it never really grew to heights of popularity in this region that it deserved, a fate that all non-Transformers robot franchises <a href=http://www.escapistmagazine.com/news/view/125971-Pacific-Rim-Beaten-by-Adam-Sandler-at-Box-Office>seem doomed to share. Maybe it all needs is a little bit of help from other popular properties. Just imagine, for instance, if Marvel's superheroes were to crossover with it. Ten proverbial buck says people would pay attention to it then.

Having trouble conjuring up what that crossover might look like? No worries, artist Aburaya Tonbi has you covered. A fan of both franchises, Tonbi recently created a whole slew <a href=http://www.escapistmagazine.com/news/view/140946-Artist-Creates-Amazing-Iron-Man-Mash-Up-Sculptures#&gid=gallery_4193&pid=1>of mash-up illustrations transforming <a href=http://www.escapistmagazine.com/tag/view/marvel%20comics?os=marvel+comics>Marvel's superheroes into an arsenal of SD-style <a href=http://www.escapistmagazine.com/news/view/118113-Japanese-Politicians-Announce-Plan-to-Build-Gundams>Gundams. The results are simultaneously adorable and awesome with several stand-outs. Thor mixed with Wing Gundam, for instance, is an absolutely perfect fit. Spider-Man, Magneto and Wolverine also make really fine mobile suits. Ironically enough, the one that struck me as being the least impressive is the Iron Man mech. Then again, how much can you really change a character that's basically just a dude inside a robot already?

Just speaking personally, the more I look at Tonbi's art, the more I want this to be an actual thing. It's not like it would be completely unprecedented for unrelated universes like these to cross-over, either. Transformers and G.I. Joe have done it. Robotech and Voltron have likewise <a href=http://www.comicbookresources.com/?page=preview&id=19587>crossed paths. Why not take things one giant step further and bring the Marvel Universe and Universal Century together so we can all bask in the glory of the epic silliness that would ensue? While we wait for that miracle to never happen, check out Tonbi's artwork and let us know if there are any other Marvel characters you'd like to see Gundam-ized. .....I can't help but think that a gundam with a wheelchair would serve no tactical purpose.

Thewse seem pretty lazy and uninspired. And I'm not saying this as one of the "why are these ever on The Escapist" crowd. It's just these specific ones seem kinda...bleh.

For once, I actually appricate this sort of news as anything beat the whole "Disney Princess as..." threads. Sure I thought it was going to be the normal version and not the SD version but still the results are nice.

While I dig some of the design like Thor, Scarlet, Quicksilver and Hulk, a few other I disagree (Hawkeye and Deadpool). Shame that you only get to see Loki head and not the rest of the body. Now if only someone customize the model to make it look like the images.

The Cyclops one looks more like a Re-GZ than a Zeta, it's missing the Wave-Rider armour
R

.....I can't help but think that a gundam with a wheelchair would serve no tactical purpose.
Click to expand...