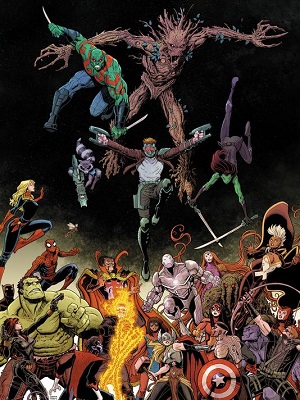 Marvel has announced a new Guardians Team-Up comic that will launch in February 2015 and feature writing from Brian Michael Bendis.

It's almost funny to think of it now but there was absolutely was a time where <a href=http://www.escapistmagazine.com/tag/view/guardians%20of%20the%20galaxy>Guardians of the Galaxy was barely even on the B-List of Marvel's roster of heroes. Following the epic success of this year's Guardians film adaptation however, the titular team of space-faring misfits has been receiving a ton of attention from the company's comic arm. In addition to a primary Guardians of the Galaxy series, the publisher has also invested in new books centered on Star-Lord, <a href=http://www.escapistmagazine.com/articles/view/comicsandcosplay/11887-Rocket-Raccoon-C-O-W-L-Thor-and-Superman-Comics-Collection-for-J>Rocket Raccoon and a team <a href=http://marvel.com/comics/issue/50965/guardians_3000_2014_1>of future Guardians. The company also announced last month that it will launching another solo-comic based on the adventures <a href=http://www.escapistmagazine.com/news/view/138002-Marvel-Announces-Gamora-Comic-for-Spring-2015>of Gamora.

Now, Marvel has announced that it will be adding yet another comic series to the Guardians line. The new book, Guardians Team-Up will feature veteran Marvel author Brian Michael Bendis in the writer's seat. As its title implies, Team-Up will concern itself mainly with partnering the Guardians with other teams and characters from the Marvel universe. The book will open with a two-part story-line that will partner the space team with the Earthbound Avengers.

It's Bendis's hope that Team-Up will help to make the Guardians a more regular entity in the main Marvel Universe. "Part of my uber-plan was to have the Guardians be more a part of the Marvel Universe and not off doing their own thing," he said. Marvel editor Katie Kubert would go on to say that the book will be a "sandbox" with which Bendis and other collaborators will be able to manufacture the sort of pair-ups that many Marvel fans adore. "Branching out with fun ideas like Gamora and She-Hulk joining forces to make a 'Green Girls Kick (Butt)' team or the insanity of something like Rocket Raccoon and Deadpool gets me so excited it's almost more than I can bear," she said.

We've reached out to Marvel to see if we could find out more information about which writers will be working with Bendis on Guardians Team-Up. The book itself has been slated by the publisher for release in February 2015.

"Part of my uber-plan was to have the Guardians be more a part of the Marvel Universe and not off doing their own thing," he said.
Click to expand...

"Them doing their own thing" was why people LIKED them! Ugh! So many of us were so sick and tired of how petty and perfunctory the earth-bound Marvel heroes were that having stories set in space with a group of less-popular characters felt refreshing, unique, and instantly attractive. While Marvel had their silly Civil War, the Guardians of the Galaxy were out there saving the galaxy.

I like Bendis on certain titles. Guardians of the Galaxy, however, under his thumb, has consistently missed the mark.
E

Stop teaming them up with others, let them do their own bloody thing. Seriously!

This is just to cash in on the MCU right? Can't swe just say that?

NOPE. The man has ruined the comic already. Apart from the DnA run in 2008-2009, Guardians Of The Galaxy is unreadable. The new run is ridiculously bad. It has no respect for continuity, no grasp for the character's and has reduced it's scope from inter galactic chaos to cheesy plots and superfluous cameos. Really, get Bendis away from what once was a fabulous comic, then a fantastic movie and now a trash rag, over-milked cow.
H

MUST you drive everything good into the ground?

EDIT: And I'm with Memoman - get Bendis off the book. His writing was once fun but overexposure has just shown me he is incapable of giving characters a unique voice so you get Angsty Teen or Sarcastic Teen and that's about it.

That said: the hack did at least make Luke Cage cool.
T