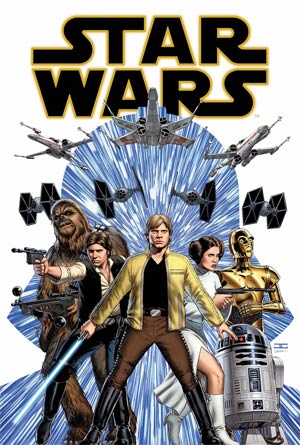 Marvel's new Star Wars comic is selling like hotcakes and just entered into its third printing.

While the publisher wasn't able to say exactly how many copies the comic had sold to date, it stated that it had easily gone beyond the one million the company had predicted it would sell. "Thanks to the strong support of the Direct Market comic shops and a few new outlets we have well surpassed 1 million copies of Star Wars #1," said David Gabriel, Senior Vice President of Print & Digital Publishing at Marvel. "The book continues to sell and is now going into its third printing." Gabriel would go on to describe the comic's success as "a testament to the quality of the book, the talent of our creators and the ingenious aptitude of our editorial team."

Just speaking personally, I'm not at all surprised by the success of Star Wars #1. Setting aside the fact that it represented a gigantic franchise switching comic publishers after two decades, Marvel did a lot to help position it as a gigantic seller. For one, it gave the book to writer Jason Aaron, one of the best regarded writers in the industry right now. More importantly though, it intentionally created really good book. As much as its early numbers might owe to variant covers, its continued sales probably have something to do with it being an excellent recreation of the Star Wars universe as envisioned in the original trilogy.

My local comics shop put aside a copy for me. I hope it was a variant cover. They don't get many of those.

Dozens of variant covers? Interesting. You know I remember a short lived book called Slingers that had a top selling number 1 issue because it had 4 variants each with a separate backup story. It tanked right the next month.

The point, this makes a nice marketing ploy, but true viability and fan support may need a few months to be accurately judged. I expect it will be well back to median sales range by the time the movie hits.

I'm still surprised that it managed to sell so well, but now the question is will it hold, or will it end up like Rocket and have a massive drop after this?

Isn't this the issue that came in January's Loot Crate? If they are counting those numbers, 100,000+ subscribers for a monthly box of random stuff probably helped. I can also imagine some LC subbers wanting to collect the other variants.
A

Hairless Mammoth said:
Isn't this the issue that came in January's Loot Crate? If they are counting those numbers, 100,000+ subscribers for a monthly box of random stuff probably helped. I can also imagine some LC subbers wanting to collect the other variants.
Click to expand...

Yes it was (I'm a subscriber the variant cover was pretty cool - Han & Chewie smuggling lootcrates), I think it's also the first comic in the new Disney Star Wars continuity, and it's a first issue which always helps.

I would expect quite a drop off, it was a decent enough story but as a long-time Star Wars fan it did absolutely nothing new or interesting. It's also set in the safe, boring period between A New Hope and Empire where nothing can really happen or change with the main characters ( a period that was done to death in the old continuity). I don't think the writers are going to be freed up to explore until after VII hits theatres.

I saw the cover at the shop, and I considered picking it up, but then I saw Princess Leia's knee and I just started cracking up. R2-D2 is even like "Woooooo" and I just couldn't take it seriously and buy it after that.
Show hidden low quality content
You must log in or register to reply here.
Share:
Facebook Twitter Reddit Pinterest Tumblr WhatsApp Email Link
Top Bottom