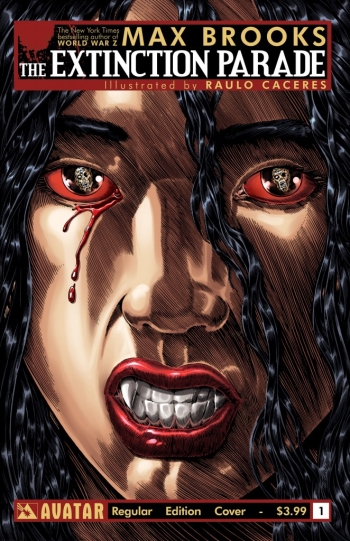 Legendary Television and Digital has optioned Brook's vampires versus zombies comic for development as a television series.

"I only brought the idea to one company, Legendary, because they do the kind of quality work of which any writer would be proud," says Brooks. "While the comic series from Avatar continues, I am thrilled to be working with Legendary to develop Extinction Parade into an innovative new series for television." The miniseries from Avatar Press features art by Raulo Caceres and is based on a short story by Brooks. William Christensen, publisher of Avatar Press, says, "Max Brooks is a visionary with an incredible ability to tell stories that deliver a fresh approach to the horrors that haunt our nightmares. His work on Extinction Parade has been a stunningly rich tapestry of cultures in decline and a biting indictment of the perils of privilege. It will make the perfect television series to appeal to fans who have until now settled for thinly veiled soap operas parading as horror."

Brooks' novel World War Z was adapted into the 2013 film which shared little with the book other than its title. With Brooks' signed on to work closely on the series, I'm excited to see what comes out of this. The Zombie Survival Guide and World War Z have been a staple on my bookshelf for years, and I would love to see Brooks' vision of zombies brought to un-life more faithfully.