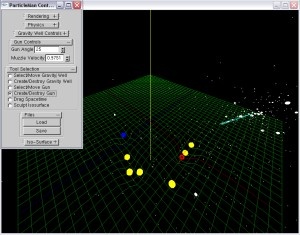 For Spore [http://www.spore.com] fans who just can't wait for the real thing, Maxis has released Biome and ParticleMan, two "early Spore prototypes" that will give gamers a taste of the early stages of the game's development.

Biome, described as a "programmable cellular automata simulator that allows users to develop simple Game of Life [http://simcity.ea.com/] software. The software uses a language based on chemical stoichiometry, simulating changes in cells in the same way chemicals change when they are exposed to other chemicals, and was used to study "stochastic, self-propagating star formations (the process whereby the ignition of a star promotes the creation of more stars) on a galactic scale."

The second prototype software, ParticleMan, simulates gravitational attraction between particles in a cloud, and was used to study gravitational dynamics in orbits, nebula and star formation, and particle streams from pulsars and black holes. Players can manipulate physics controls in the software to create differing gravitational simulations, using high fusion rates to simulate the birth of a star in a collapsing nebula, or low rates to simulate interactions between stars in a galaxy.

"Usually these prototypes are never seen by the public, but we thought some of the more intrepid players out there might enjoy playing around with a few of our early Spore prototypes," the company said on its website. "Keep in mind these are not tested, supported or even easily explained."