[image height=200 width=450]http://sarge.wheresthebeef.co.uk/SGv2/Wallpapers/wallpaper%5BMetroidFusion%5D02.jpg[/IMG]
Intergalactic bounty hunter Samus Aran is once again called into action on the surface of the dreaded planet SR388, to assist Biologic Space Labs in collecting specimens to take back to the main lab orbiting the planet. During the mission however, Samus is attacked by an incredibly dangerous life form, the organism that would come to be known as the X parasites. So Samus boards her ship to return to the B.S.L. station, when disaster strikes. The X in her body begin ravaging her nervous system, and Samus loses consciousness as her ship drifts into an asteroid field.

Luckily though the station was able to recover the ejection pod. But the in the time that passed, the X multiplied within Samus, even integrating with the organic components of her suit, which had to be surgically removed, and with them numerous of Samus? abilities. But Samus?s condition continued to worsen, until a cure was found: a vaccine created using a cell culture from metroids, the X?s sole predator. Samus, realizing she owes the infant metroid her life twice over, awakens to news of a mysterious explosion in the B.S.L. station, and is sent to investigate.

Thus begins the fourth installment of the Metroid series: Metroid Fusion for the Game Boy Advance. Players must guide Samus through the various environments of the station, ranging from a perfect replica of SR388, to night habitats, to frozen and superheated environs, as she battles the deadly X. As the manual explains, the X, through a process called Mimesis, has the ability to infect a host, upon which they travel to the nervous system and divide asexually. This kills the host, and the X then absorb the DNA of the host and use it to mimic their victim perfectly. Also, as the game progresses Samus will recover key abilities that allow her to advance to the next part of the mission.

Graphically, Metroid Fusion is I would say solid. While there isn?t really anything spectacular, it does have some nice visual effects, the diffusion missile in particular. I felt the background music added some nice depth, and really helped set the right mood. One quick note, the sound effects are fairly loud, so if you are playing this in a car with other passengers, some headphones might be a good idea, so as not to annoy them.

Game play wise the game utilizes the same side-scrolling 2-D platforming of its predecessors. For the most part it is rather straightforward, although certain areas and some items in particular will require some clever usage of Samus's abilities on the part of the player. The game is mostly linear, and while players certainly can revisit previous areas, the story itself follows a set path. The controls are rather simple, which is always nice, though that may be a given since the Game Boy Advance only has four buttons. The combat, especially near the end, does tend to get a bit one-sided in favor of Samus.

One thing I would like to make a note about is the difficulty curve. Well I wouldn?t really call it a curve. In a weird sort of sense the player controls how difficult things will be. Three kinds of tanks are scattered throughout the station: energy, missile, and power bomb, each increasing Samus?s capacity for weapons or health. What makes me say players sort of control the difficulty is that if you do an even halfway decent job of collecting the tanks, the game is fairly easy. If you like an extra challenge though, (or are just simply suicidal), you can try and not collect any at all save for the one missile tank you cannot avoid collecting.

Well in conclusion I ask the big all-important question: Is Metroid Fusion fun? I myself would have to answer yes. I enjoyed the 2-D plat forming that was very much like that of its predecessors. However, it does lack a bit of replay ability. The game will average anywhere from four to six hours, depending on whether the player goes for 100% collection and thus the best ending screen. I felt it was just long enough to stay fun throughout, without feeling like it was dragging itself on.

Overall Metroid Fusion is a solid addition to the series.

Recommendation: It is worth playing through at least once. 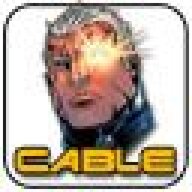 Good review. Personally, this Metroid game is my favorite. The only Metroid games I have played are Fusion, Zero Mission, and the Prime series. I myself did not enjoy the FPS style of the Prime series, and while Zero Mission was fun, I didn't find it amazing. I love everything about Fusion. Even though the difficulty curve was kinda weird, I enjoyed it. I'm not exactly sure why. One of my favorite parts about Fusion is the landscape. The empty space ship with different man-made environments just seems to be the perfect landscape for a Samus game. At least for me.

I'll agree that Fusion was one of my favorites.
Super Metroid is up there too.
The Prime series started off well, but with Echoes and Corruption it has gone down hill. The pseudo-Samus has been overused, yet it was a great idea in Fusion.

I hate to be the guy who criticize you, but the review was a little meh. It was fairly short, and you didn't talk much about the game play except for the difficult curve. If you could expand on how the game is to play, it would be a better review.
G