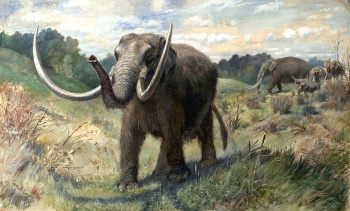 A 10,000-year-old tooth from an extinct species has been discovered by a child.

Plenty of kids go through dinosaur-loving phases and attempt to dig up fossils in the yard, but very few literally stumble upon a 10,000-year-old tooth while playing in a nearby creek. That's exactly what happened to 9-year-old Philip Stoll last summer, though--while exploring a creek, he stepped on an oddly-shaped item, which "everybody in the neighborhood thought... was pretty cool." As it turned out, it was indeed pretty cool, as the object was the tooth of a mastodon, a species that has been extinct for thousands of years.

Upon seeing her son's discovery, Philip's mother did some research on the mysterious eight-inch-long object, finding a picture of a mastodon tooth on the internet that appeared to match what had been found in the creek. James Harding, a Michigan State expert on reptiles and amphibians, confirmed it. In an email to CNN [http://www.cnn.com/2014/04/18/us/michigan-mastodon-tooth/index.html?hpt=hp_inthenews], Harding stated, "This is indeed a mastodon tooth... Apparently (it is) the upper surface, broken off at the roots."

This must be especially exciting for Philip, who wants to be a paleontologist when he grows up. Following his discovery, however, his mother has her own worries: "It's going to be hard to get him run around with shoes on or come inside to do his schoolwork."

Basically that's what I constantly dreamed about as a kid. Whenever we went to a river, lake, or some other environment that could shift rapidly (like a shore) I would look at the ground and look for things like that. Especially pebble beaches I scoured for small fossils.

I don't think I ever found something, sadly. A vague sense tells me that I might've found a tooth once, but I can't check that.

This is what I like about living around deep deposits of limestone with an artificial lake carved through the center of them - I can't walk 2 feet without tripping over fossils here, pre-mesozoic oceanic fossils too. Lots of shellfish, old ferns, coral, trilobites. I've picked up stones here that are brittle, break apart easily, and chock full of spiral shells. The hard part isn't getting them, but keeping them in one piece once I got em.
E

Well, that little boy just had that adventure we all wanted to go on. Good for him.

Have the kid do a school report on it. That way he will get an A in science until he enters into College. lol

But seriously, I enjoyed finding small fossles as a kid. Kansas is full of Limestone and Chalk quarries. I had a great time finding small trilobites (as a grown up I know what that means, as a child I thought they just looked cool).
Show hidden low quality content
You must log in or register to reply here.
Share:
Facebook Twitter Reddit Pinterest Tumblr WhatsApp Email Link
Top Bottom