I just noticed something, why does the dog have two headsets on?! Have I been playing LoL wrong all this time? 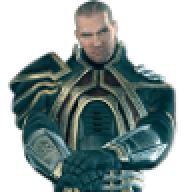 LostCrusader said:
I just noticed something, why does the dog have two headsets on?! Have I been playing LoL wrong all this time?
Click to expand...

One has a working kicrophone, but busted speakers. The other didnt have a mic.
A

RaikuFA said:
Question, why do we allow people to harass/berate others in online games? You'd think after that whole crackdown in LoL and the whole OMD dev going full retard we'd think we learned our lesson.
Click to expand...

The answer is simple... because it can be done with a little work, some research, and a little bit of general testing... Basically, since it isn't directly costing them money, companies will put minimal effort (and money) into fixing a problem that doesn't visibly effect their bottom line.

Some companies do actually "police" their chats. Dota, for example, give you the ability to report players for communication abuse, ability abuse, and/or intentional feeding. It cuts down on a lot of the problems by throwing these players into penalty brackets until they play 2 games to completion. You can also be muted so no one can hear or see anything you do (this can be done ingame, or by the Dota Devs if you have been repeatedly flagged for communication abuse). It's not perfect, but it's sooooo much better then CoD, and other FPS games where a bunch of 12-year-olds scream at you.

Oh, also, nearly 1500 hours into this game, won over 600 matches, and im at the 3.5k mmr bracket.... even i see people who play as if they lacked opposable thumbs. Im in the 90-ith percentile (which doesn't say much... i'm sitting at where most dota 2 players reside).

For those of you wondering, the MMR hump most people talk about is the lower 3.5k bracket. It's at this point where most players have sufficient mechanical knowledge, but lack the individual expertise and polish that will carry them above the hump. Here, most often, players will pick a hero or heros they will play constantly. They get good enough with that one hero to get over the hump, because the big thing people lack at this point is efficiency. Playing that one hero lets them see where they can improve, not only in last hits, but in: movement and decision-making, laning choices, item builds, skill builds, understanding limits and limitations, seeing the game from a bigger prospective, and understanding mistakes as they happen(as opposed to seeing them only in hindsight). This expertise is then applied to all other heros, making you a better player in general.
Click to expand...

Yeah, well tell that to Riot, who wanted to put me under review with their tribunal for "unsportsmanlike conduct and feeding" because I hit muteall and ignored someone who claimed mid or something apparently. Also kept dying alot.
Click to expand...

Riot is a bad company... period. That aside, the tribunal system is a noble, but is inherently flawed, effort. It's easy to abuse and very hard to actually achieve anything close to a fair ruling. If you don't like it, change games (for a less shitting company and punishment system). I recommend Dawngate. I would describe it as the better League of Legends. Looks better, feels better, no entrenched meta bullshit. I would assume if you play league, you don't like dota (for its soul crushing depth, as many claim) or Heros of the Storm (for its extreme lack of depth). Dawngate is the best intermediary between depth and accessibility, where League use to be before MOBAs became the flaver of the dacade, like MMOs use to be.
Show hidden low quality content
You must log in or register to reply here.
Share:
Facebook Twitter Reddit Pinterest Tumblr WhatsApp Email Link
Top Bottom