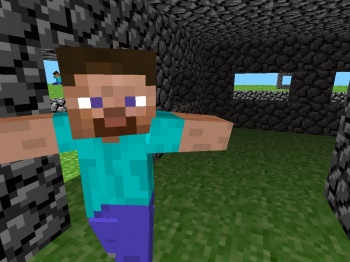 What is it about Swedish developers? Is there something in the water over there?

Apple has announced its top-selling apps for 2013 and the two biggest are Mojang's top selling Minecraft and King's top grossing Candy Crush Saga. Minecraft is the only one on the top 20 app list that's a paid game; the rest - including Candy Crush - are free-to-play, with microtransactions.

Minecraft's success is at least partly due to its appeal to kids, though children were never the target audience. "It's still not planned to be a kids game! It's a happy accident," says Mojang's Daniel Kaplan. "But maybe their big brother or sister plays it, and they want to be a part of that too."

The Pocket Edition is intended to be as much like the desktop experience as possible. That includes the pay scheme, where you purchase the game once, rather than the freemium model which depends on repeated, small transactions. Mojang thinks that's "good form," says Kaplan, "especially for parents."

Candy Crush was always intended to be a top 10 game, but its current success [http://www.escapistmagazine.com/news/view/129684-Candy-Crush-One-Year-On-Half-A-Billion-Served] has exceeded even King's expectations. When it was being developed, casual games still weren't thought of as top tier stuff, but King "disproved that by making a game that hit the top and kept growing," says co-founder Sebastian Knutsson. It's now a franchise, which means more games in the same universe as well as an expansion of the original puzzler.

The Dreamworld is coming to Candy Crush, King promises, where levels that players have already beaten can be played again in a different format. Knutsson describes it as "a nice Christmas gift where they can replace the levels they've always hated and play it in a new form with a gameplay twist."