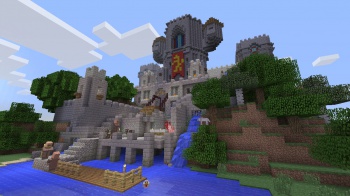 Minecraft is finally arriving on its first Sony console, with PS4 and Vita editions soon to follow.

Minecraft: PlayStation 3 Edition will be identical to other console versions (except, I presume, <a href=http://www.escapistmagazine.com/news/view/118283-Update-Minecraft-Xbox-Adds-Halo-Avatars>for a lack of Microsoft-exclusive DLC). That means players can expect a smaller worldsize compared to the PC original, but will also find split-screen multiplayer and Friends List support. New DLC skins and texture packs will be available in the PlayStation Store shortly after release, and may even include a few Sony exclusives. There's no word on whether the PS3 Minecraft will feature cross-play or Vita's remote play functionality, but we'll probably find out when the PS4 release date is announced.

Minecraft's previous editions sold incredibly well, <a href=http://www.escapistmagazine.com/news/view/125394-Minecraft-PC-Tops-11-Million-Sales>exceeding 11 million copies for PC and <a href=http://www.escapistmagazine.com/news/view/123692-Minecraft-Pocket-Edition-Boasts-10-Million-Sales>10 million for mobile editions alone. Now that most gamers are familiar with Minecraft, maybe the PS3 edition is where sales will finally slow down.

Oh, who am I kidding? It's a Minecraft world, baby. We just build in it.

Source: PlayStation Blog, via <a href=http://www.joystiq.com/2013/12/16/minecraft-coming-to-ps3-on-december-17/?a_dgi=aolshare_twitter>Joystiq

On the one hand, I already have Minecraft on PC and on Android. On the other hand, I've got three younger siblings (5, 7, 9) who would love to play splitscreen with me, so this is a pretty obvious purchase anyway.

If Notch releases this game on any more platforms he's going to have more minecraft money than God!

Hope they end up allowing you to cross-buy and cross-play this, so I can play it on any of my PS platforms and take worlds with me on the Vita. Probably a stretch, but a man can dream.

Man, they're just releasing that game on PS3 now? The graphics are going to seem so horribly outdated.

...I'm sorry, did the article really say a VITA version is coming soon?

Either way this sounds pretty cool, the more platforms it's on the more people that can play it, and more players is always a good thing.

I wish this would get released on the WiiU.

That absolutely sounds worth triple/quadruple dipping for. Gamepad-based inventory management? It'd be amazing.

If there were an option to turn off the hunger mechanic and go back to old school porkchop hoarding before you head into the abyss then great. I enjoy exploring both above and below ground for long periods, but its hard to do when you need to essentially avoid running, jumping, and carry half your inventory filled with food or just never venture far from your base.

In the old days I'd go far and wide setting up basecamps and exploring caves, taking care not to fall or take damage in battle. Once hunger was added I could break my legs in a fall and as long as I had a fully belly I didn't care. I could zerg rush skeles as long as I stopped for noms.

I pretty much haven't played it since. Villages, the nether, xp bars, etc. are things I didn't really need or want when I bought it. Endermen are pretty cool though.

The game has been out a good number of years, as the article says it's on everything from PC to phones and people are still posting things like "so this is a pretty obvious purchase anyway." ... just how much of this shit can people cram into there face?!?
P

I've been stockpiling all the monies since I heard about this in October. The best part is that the vita will be getting a version like the console port as opposed to the mobile port which is basically Minecraft classic
S

That absolutely sounds worth triple/quadruple dipping for. Gamepad-based inventory management? It'd be amazing.

It's the one system that I would have thought it'd already have an announcement for. I'm glad there's a version available on nearly everything now but a Wii U is just built for this kind of game.
Show hidden low quality content
You must log in or register to reply here.
Share:
Facebook Twitter Reddit Pinterest Tumblr WhatsApp Email Link
Top Bottom