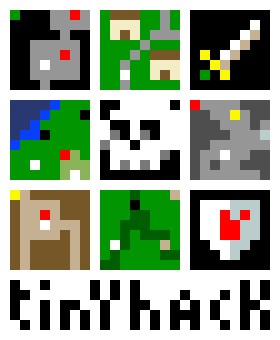 Tinyhack is about as minimalist an adventure game as you can get.

Going back to play Legend of Zelda on the NES might seem simple after playing the 3D, vertex-shaded, bloom-lighted games of today, but Rob Beschizza of Boing Boing's Tinyhack will show you what a simple game really is. It's an adventure game that plays out on a grid of just 9x9 squares.

Tinyhack boils gaming down to its simplest elements. It uses pixels of different colors to represent various virtual objects. The player is a square of white, dungeon entrances are red, gold artifacts are yellow, and monsters are brown and purple (those purple ones are tough!). The player's health is represented by a square of green that darkens as it lowers.

The goal is to collect 16 gold artifacts to get the key to the island fortress. Players can find a sword, shield, and boat to help them along with way, in addition to magical abilities.

The name of the actual game is randomly generated from set titles when you load it up. I got titles such as Nemesis's Gemstone, The Sphinx's Artifact, and Dreamstone of the Unicorn. They all basically work because, well, the graphics leave a lot to the imagination.

Despite its minimalist style, Tinyhack is not easy. It requires some memorization to learn which dungeons to take on first for health management purposes. It's a fun little thing though, and reminds us that gaming is not about graphics all the time. You can play it here [http://boingboing.net/rob/tinyhack/].

Well this looks interesting, I'm sure i'd have fun if I played it...Maybe I'll play it before skyrim comes out just so Skyrim can blow my mind even more...[sub][sub]God I want skyrim[/sub][/sub]

Edit: FINALLY! After God knows how long I got the first post.

I'm quite amazed how good this is. And I was brought up on ZX81 games.

Wow, this puts a whole new level on minimalism. 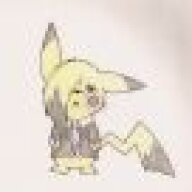 Meh. It was ok to mess around with until my right hand started to cramp up.

I don't think anyone here's rig can handle that kind of graphical power.
V

Does anyone know why when I load the page up, the name of the game keeps rapidly changing for a few seconds before stopping? It creates a weird dissonance between the title & description.
S

Gahhh!!! 5 pinkies in a room at once. Now that's just a brutal surprise.