Only death and taxes more inevitable.

Warner Bros. has provided a new trailer and date for a Mortal Kombat X re-release which should surprise absolutely nobody. The new product, Mortal Kombat XL, will bundle together the base game's contents and the contents of its two Kombat Pack DLC releases.

Mortal Kombat XL will release in North America on March 1 for PlayStation 4 and Xbox One.

Nintendo have already reserved my wallet for March but I will pick this up at some point.

Once again, they don't give a shit about PC.

Fuck WB, I ain't buying shit from them ever again, bunch of lazy, sleazy assholes. 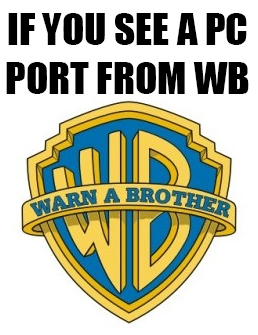 Oh, darn it, I knew there was gonna be a Komplete Edition and I bought the game when it first launched anyway.
Anyhow.
So, wait, are all the characters of Kombat Pack 2 gonna be dished out at the same time or are they gonna be rolled out one by one like last time?
F

I was pretty excited to play as all of the new characters, especaially Triborg because of the teleporting, then the bombshell hit, and I found out that I the DLC is not coming to the PC, so I guess that I will be missing out on this particular piece of content.

Oh yeah, I forgot to mention, fuck you Warner Brothers.

Awesome! By the time I get a PS4 in several months the price for this collection will likely be down to about $20...if not less. Then again, I'm still kinda pissed at WB/Netherrealms for not launching the complete edition of InJustice on the Wii U...Also kinda annoyed that Injustice got a Mortal Kombat character instead of an appropriate DC Universe villain...I guess I can always get this used next year for a sub-$15 price. I'm sure it won't be too difficult to find.
Show hidden low quality content
You must log in or register to reply here.
Share:
Facebook Twitter Reddit Pinterest Tumblr WhatsApp Email Link
Top Bottom