Double Dragon - The Warriors Wishes It Was This Good 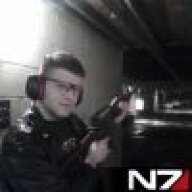 Uh...Jim? Are you ok? You seem to have taken the piss out of your own show here.
If this was completely sincere, I'm even more worried.

So... deliberate self sattire or have you given up trying to persuade is that the shit is gold?

That was hilarious. Way better than simply stating 'so bad, it's good' or some other overused argument that doesn't really explain much. I kept expecting Jim to slip back into his normal mode at some point, but when I realized it wasn't coming I laughed all the more. It never occurred to me to compare this movie to the Warriors, but now I kind of want to sit down and compare them both. I remember watching both the Double Dragon movie and cartoon, and both of them were pretty, well, 90s in that way that only 90s entertainment can be.

I was half expecting it to end with a black and white still shot of the main characters and have a little 'save them from obscurity' kind of charity plea.

I really liked your narration, Jim!
Never saw this myself. So, oh!, what have I done missing this pearl of cinema history?! :'(

See this movie because reasons?

I think you should see it because Robert Patrick has a gift for delivering wry 90's one-liners and I think he deserves to be celebrated for that.

Christ, not even Jim could defend Double Dragon.

I mean, I am not sure if it has any reason to be viewed other than to feature in a "what not to do" guide for directors wanting to make a video-game movie.

Self satire is pretty much what you're left with when trying to defend a movie of this caliber. When faced with absolutely no chance for success whatsoever, go out as boldly as possible and without flinching. Well done Jim, well done.

Technically, a cure for neck testicles currently exists. Sadly though, neck castration is both difficult and messes with the sufferers bio-chemistry. Female sufferers do tend to go through with it.

I've never actually seen The Warriors. The ps2 game was pretty good though.

I'm ashamed to admit that it took me a good 15 minutes to realise this was satire.

Even as a kid, I didn't enjoy this film. Looking at it now, it was ripping off so many movies, Robocop is the first that came to my mind (in terms of tone and "satire").

Having seen the video, it almost seems as if Jim is going mad, trying to find justification for a movie that drained his soul...equal parts amusing and horrifying...
L

Hmmm. I never thought of the film like that. Obviously it's deep narrative was way over my head at the time. Worth another viewing I feel. Ta jim.

Jim, after calling The Warriors out like that in the title, you have to give us your opinion of it! Seriously, I'd really like to hear of one of the few people in the games industry and surrounding media whom I still respect, give their opinions on one of my favorite movies. Time after next, perchance?
T

I mean, I am not sure if it has any reason to be viewed other than to feature in a "what not to do" guide for directors wanting to make a video-game movie.
Click to expand...

2) About two thirds of the way through the movie, there is a random zombie attack, caused by a dead body being possessed by the spirit of a bad guy. And while the possibility of possession had been brought up once before, this scene stands on its own. Nothing like it has ever happened before in the movie, and nothing like it will ever happen again. Random zombie attack in movie without any other zombie stuff in it? Awesome.

3) At one point our heroes take a boat trip on a lake that's on fire. When's the last time YOU set a lake on fire?

4) In the same section of the movie, they walk into a silent, abandoned junkyard, and are instantly - and I mean INSTANTLY - surrounded by about three hundred armed gang members. They just appear out of nowhere.

5) Jim mentioned the truck with teeth. What he didn't mention is that our heroes temporarily blind its occupants by hurling a newspaper out of their car window that inexplicably attaches itself to the truck's windscreen, perfectly covering the whole thing. And how do the truck's occupants deal with this? They bring up a CAMERA that sits on the bonnet of the truck, broadcasting a VR digital display of the oncoming road onto a screen that the driver uses to navigate. Yes, someone designed this truck specifically anticipating attacks by magic windscreen-obscuring newspaper that for some reason can't be removed by, say, reaching out of the side window and just pulling it off; and came up with a solution involving virtual reality displays and a hood-mounted camera. I WANT THAT TRUCK.

6) There's a scene where the mohawked guy mentioned in #1 walks through a door, hits his MOHAWK on the top of it - not his head, just his hairstyle - and grunts in pain. Did you know that hair is actually dead? Well this guy doesn't.

I could go on and on about the sheer volume of awesome terribleness in this film, but I think that's enough to make my point. "Double Dragon: The Movie" is one of the best bad movies I've ever seen. I just love this terrible, terrible film.

Jim, how did you manage to record this without cracking up? Were you digging a salad fork into your thigh during the entire session, or something?

What kind of journalist are you if you can't even get the names of the main characters right, Jim?

The Lees are named Home and Ug. Get it right!

....Aaaanyway, I saw this movie in theaters, I owned it on VHS, and I own it on DVD. It's crazy, stupid fun, and I definitely enjoy it.

Callate said:
Jim, how did you manage to record this without cracking up? Were you digging a salad fork into your thigh during the entire session, or something?
Click to expand...

Electronic Arts took his soul accidentally, mistaking him for an editor at IGN. Laughter is the expression of the soul, so Jim was expressionless until the situation was rectified.

This one was entertaining. I haven't seen this since I was a child, I thought it was so lame back then. These clips seem to be fun in a cheesy way.

Now let's see if Jim Sterling can defend the live action Fist Of The Northstar movie.

Whaaaat? Since when was "Demolition Man" a bad movie?!

Good news, Jim! Using Double Dragon to calibrate the "Why does this need defending?" was a success. Nobody was willing to defend this and we now have a baseline from which to proceed.