Netflix Commits to Gotham Before the Series Premieres

Netflix Commits to Gotham Before the Series Premieres 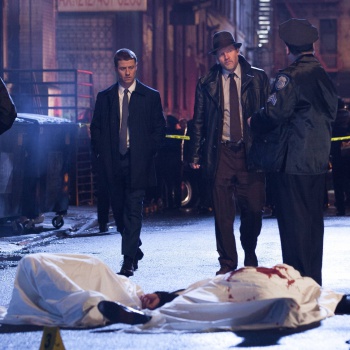 The Batman prequel series Gotham comes to Fox this fall, but Netflix has already committed to streaming the first season.

Even though new series [a href="http://www.escapistmagazine.com/tag/view/gotham"]Gotham[/a] doesn't premiere until September 22, Netflix has bought the rights to stream the series after the first season, according to [a href="http://deadline.com/2014/09/gotham-netflix-deal-826991/"]Deadline[/a].

Netflix is a fantastic place to watch drama series like Breaking Bad and The Walking Dead, as well as their original content like House of Cards. These shows benefit from the streaming service by letting viewers binge from one cliffhanger to the next. Netflix is a perfectly natural home for Gotham once the first season has finished its initial broadcast on Fox.

What makes this deal interesting ([a href="http://deadline.com/2014/09/gotham-netflix-deal-826991/"]besides the reported $1.75 million an episode price tag[/a]) is that Netflix and Warner Bros made the agreement before the first episode of the Batman prequel series even aired. Typically, a series would run for at least a couple seasons before Netflix would nab it, but that trend started to change after the streaming giant [a href="http://www.theverge.com/2014/8/28/6078915/netflix-gets-nbc-the-blacklist-for-2-million-per-episode-report"]grabbed the rights to The Blacklist[/a] just before the second season launched (for $2 million an episode).

The deal is also worldwide - at least to all of the markets Netflix currently reaches - while deals like this typically are determined territory-by-territory.

Netflix Chief Content Officer, Ted Sarandos, expects Gotham to be a success, especially internationally. "The Batman origin story is sure to have massive global appeal so it is fitting that, along with Warner Television, we have created a new model for distributing a show that international and domestic audiences will love."

How much of Gotham will actually be an origin story for the Dark Knight, though? The series focuses on Detective Jim Gordon before he became the commissioner of the Gotham City Police Department and serves as a number of origin stories for Batman villains like the Riddler, Poison Ivy, and [a href="http://www.escapistmagazine.com/news/view/136173-Will-Gotham-Have-a-New-Joker-Every-Episode"]eventually the Joker[/a]. When our Elizabeth Harper saw [a href="http://www.escapistmagazine.com/articles/view/moviesandtv/12020-The-Gotham-Pilot-Has-Colorful-Characters-But-Falls-Flat"]the premiere episode at San Diego Comic Con[/a], she felt the show had great characters, but suffers because we already know what Gotham City eventually will become. Still, it is one of the [a href="http://www.escapistmagazine.com/articles/view/moviesandtv/12175-Best-September-TV-Shows"]fall series we are looking forward to this month[/a].

It's also becoming more common to hear people say, "I'll just wait for it to come to Netflix," when it comes to keeping up with a TV series. Does such an early announcement mean that more people will skip the broadcasts on Fox? If you don't live in fear of spoilers, it can be appealing to watch a show on your own schedule, rather than one set hour a week. Warner Bros doesn't need to worry much about that, since they are guaranteed $1.75 million (if that number is accurate) per episode anyway.

Even if Fox doesn't commit to a second season of Gotham (they haven't yet), this also ensures that the show will have a home on Netflix after the first season, if no other network grabs it.

I've still got a feeling this show won't last long or have many fans. Just don't think Gordon is interesting enough without Bats, or his rogues gallery and adding in any of the villains without Batman might be something a bit too farfetched for me.
Show hidden low quality content
You must log in or register to reply here.
Share:
Facebook Twitter Reddit Pinterest Tumblr WhatsApp Email Link
Top Bottom