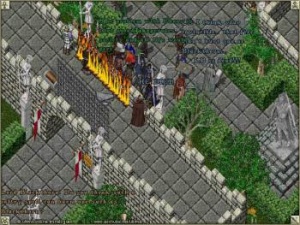 The University of Texas [http://www.utexas.edu/] has embarked on a new study aimed at determining the best way to preserve the history of online games.

"It's a huge challenge for archivists to deal with digital information," said Professor Megan Winget of the university's School of Information [http://www.ischool.utexas.edu/], who is serving as coordinator on the project. "One of the most interesting problems for digital preservation is interactivity and how difficult that is to preserve."

Interviews with game developers that focus on the process of creating games will be a central part of the project, and feedback from beta testers will also be useful with regards to how it influences a title's development. Winget said information taken from these interviews will help determine how the project goes about preserving "malleable" media. "When you are trying to preserve anything, you are trying to preserve the most important things about that artifact," she said. "With videogames we do not yet know what is important."

"We want to raise the consciousness in the industry about how important these records are," she continued. "I do not think they save anything or it's saved in such a way that they would not be able to recognize the significance of what they are holding."

Winget also expressed interest in talking to gamers who were involved in landmark events in online games, citing examples such as the assassination of Lord British in World of Warcraft [http://www.uoherald.com/]. She said she was particularly interested in "oral histories" of these events, as well as any media collected by gamers as these events were taking place.

The technology behind these games is often a stumbling block, Winget said, because digital media degrades so fast. "You cannot just throw everything into a box and put it in the attic so in 50 years your kids can look at it," she said. Rory McLeod, digital preservation manager at the British Library [http://www.bl.uk/], agreed, saying older technologies could sometimes prove "troublesome" during archiving efforts. "Old digital cameras do pose a problem," he said. "The RAW formats that camera capture images in are proprietary in nature so this raises issues about accessibility if the information about that RAW format is lost."

Of even greater importance, however, is the potential for difficulty with copyright legislation. "As more and more information is published in e-only formats, the legislation must keep pace so that we as digital librarians can keep this information safe without the threat of legal issues hanging over us," McLeod said. "We are far from drowning in digital data as our skills have come a long way. It's more a case of not drowning but waving."