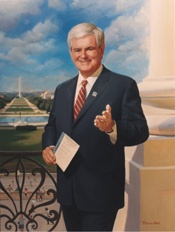 Former Speaker of the House Newt Gingrich has declared [http://www.humanevents.com/article.php?id=22451] Second Life to be a "sophisticated extranet, representing the next wave of collaboration using a 3D Internet virtual world," and plans to hold a workshop in the metaverse's rendition of Capitol Hill's West front.

Gingrich's thinktank is called "American Solutions For Winning The Future," and is, according to the man himself, "a unique non-partisan organization designed to rise above traditional gridlocked partisanship, to provide real, significant solutions to the most important issues facing our country."

Gingrich will grace Second Life with his presence on September 27, 2:00 p.m. EDT, to commemorate the day when, 13 years earlier, he and other Republican members of Congress signed the so-called "Contract With America [http://en.wikipedia.org/wiki/Contract_With_America]" into law, which detailed what the agenda of Republicans would be if they were elected the majority leaders of the House of Representatives.

He recently became enamored with the famed Linden Labs metaverse, writing about how he finds it "so compelling that people actually spend real money to buy real estate in this online reality. The Swedish government actually has an embassy in Second Life."

Gingrich did not return emails asking whether he planned to visit with the metaverse's growing griefing [http://furry.wikia.com/wiki/Babyfur].

Good question - actually, the Speaker did have anti-griefer measures in place. He hired Metaverse Mod Squad, http://www.metaversemodsquad.com/, a company that specializes in moderation and security services in virtual worlds. MMS is featured in this great article in New World Notes. http://nwn.blogs.com/nwn/2007/09/guarding-newt-s.html#more
And, we are pleased to report, the event featured spirited, authorized protesters, but was griefer-free. http://www.sluniverse.com/aw/Story.aspx?StoryID=165