Nickelodeon seems out of touch with animation these days

TheMisterManGuy said:
N with the exception of Uncle Grandpa (which isn't even a good show)
Click to expand...

I think Uncle Grandpa gets a lot of undeserved shit. It's a really funny show regardless of whether the main character sounds like he is constantly having a stroke.

Anyway, I just don't think Nick has realized they can tap a duel market by making animation that's appealing to both kids and adults. Cartoon Network has been exploiting both demos for years now and I have yet to have the internet tell me about the new must watch show on Nick. It just doesn't happen. No one older even watches the newer Spongebob episodes. So I'd be inclined to agree, even though I haven't seen any of Nick's new shows and can't speak as to the quality (and even then, I'm 19 and not in the target demo for those shows anymore so my opinion wouldn't be relevant).

Slightly off topic: does anyone remember Robotomy? It was like the kids' version of Superjail (I think the same guy directed a lot of the episodes). They added all 10 episodes to Netflix recently, Patton Oswalt was a lead character in it. It was just before the Adventure Time craze hit, so it got cancelled before Cartoon Network was flooded with the adult viewers who would have loved it. 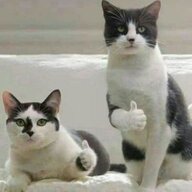 TheMisterManGuy said:
N with the exception of Uncle Grandpa (which isn't even a good show)
Click to expand...

I think Uncle Grandpa gets a lot of undeserved shit. It's a really funny show regardless of whether the main character sounds like he is constantly having a stroke.
Click to expand...

The problem with Uncle Grandpa, at least in my opinion, is that it doesn't tell a cohesive story. It's too concerned with just being random, for random sake. The characters are all one-dimensional are never really fleshed out. Granted, I don't mind surreal, random jokes, but you need to have a setup, or something to play off of for it work. In a good surreal show like Adventure Time, it's surrealism is used to build mythology and characters that eventually come back into play. And it's random events have set up to them, either to play off a joke, or to progress the plot. And even with it's weirdness, Adventure Time can tell a cohesive story, it even has story arcs (albeit, very short 2-3 episode arcs). Uncle Grandpa has no plot, no real characters, no rules, no pacing, it's just random nonsense for random nonsense sake. I'll admit, the show is entertaining on a mindless level, but don't expect the characters or setting to be fleshed out more.
Show hidden low quality content
You must log in or register to reply here.
Share:
Facebook Twitter Reddit Pinterest Tumblr WhatsApp Email Link
Top Bottom