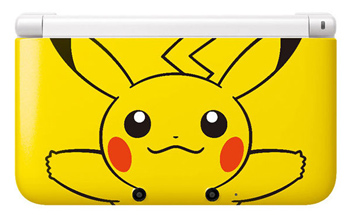 Pikachu and White 3DS' to reach European shores this year.

For those of you who prefer bright yellow to white, Nintendo is also releasing the striking Pikachu 3DS XL in Europe sometime this year. Launched in Japan just shortly before the NA release of the 3DS XL, the unique Pikachu variant of the handheld was only available to those who pre-ordered it from select Pokemon Center stores. The limited release turned the variant into somewhat of a collectors item, despite the fact the 3DS XL's dual cameras make it look like Pikachu is wearing nipple clamps.

It's not clear if these variants will be released in North America, as according to Reggie, yanks tend to prefer pink to white and silver.

"You might see a limited-time offer with a white or silver 3DS XL, or we might colorize it slightly differently," he told IGN. "But in terms of an ongoing SKU, the consumer has responded in our marketplace and said that, for a handheld gaming device from Nintendo, that kind of white or silver doesn't sell nearly as well as blue or red or even pink."

I want it so bad. I do already have a Pikachu cover for my DSi

Oh good, I feel a little better that someone else saw it.

Reminds me of the old Pikachu Gameboy I had back in the day, the one where the power button lit up his cheeks. Wish I still had that...

*cue run away in terror*

If this comes to Canada I will get one.

And then I will have a 3DS finally.

Okay, I definitely want this. Despite the Pika-nipples.

I want one. It'll go nicely next to my old Pikachu GameBoy Color. Too bad there aren't all that many games on the 3DS worth playing at the moment. There are a few but I'm not sure I want to upgrade from my regular 3DS to an XL yet. I suppose I should, Pokemon will eventually migrate over completely so I guess I can think of it as an investment.

The "nipple cameras" put me off it. Why not have the picture the other way around to make it less freaky?

DVS BSTrD said:
Makes him look more like an Austin Powers fembot to me.
Click to expand...

No puns from you?

I'm shocked by such a turn of events. Though I'm sure these limited editions won't send shockwaves through the industry, they'll certainly be a good item for collectors.