MysticSlayer said:
We have the PC Master Race and Dirty Console Peasants. But we've never had a way to describe Nintendo fans.
Click to expand...

I think Nintendo Defense Force is too friendly. It makes them sound more regal and threatening than they actually are.

I still like the idea of including "Naked" in the name for emphasizes the "insane" aspect to the name.

MysticSlayer said:
I think Nintendo Defense Force is too friendly. It makes them sound more regal and threatening than they actually are.
Click to expand...

To me it invokes the idea that Nintendo must be defended at all cost and we will brigade any naysayer who dares question Nintendo's right to defend itself...errr...make questionable business decisions.

MysticSlayer said:
I think Nintendo Defense Force is too friendly. It makes them sound more regal and threatening than they actually are.
Click to expand...

To me it invokes the idea that Nintendo must be defended at all cost and we will brigade any naysayer who dares question Nintendo's right to defend itself...errr...make questionable business decisions.
Click to expand...

I was thinking "regal" in terms of comparing "master race" to "peasants". Outside of this discussion, yes, Nintendo Defense Force works. For this, though, I'm not entirely pleased.
M

The idea of brand loyalty is among the most virulent and devastating ideological poisons to exist (and that's a crowded race). When Nintendo offers a platform that is open enough to perform the functions my other systems currently serve, when they stop stamping on review and transformative media with the grace of a rhinoceros, when they have actually produce enough games interesting to me that I can justify both the price and the time over other games, I may deign consider purchasing their products and if I do it will in no way ensure I continue to purchase their products if they offend me for any reason I wish or fail to continue to produce games I find interesting. And frankly I wish every consumer would hold themselves to at least that same standard.

I really like Nintendo games but they're not without their issues. For example, Nintendo has this weird thing about keeping options menus out of their games. Twilight Princess has been criticized as being too dark but that criticism was abolished when the Wii U version introduced a brightness slider. Then there are games like the Metroid Prime Trilogy and Skyward Sword which are utterly unplayable for me because of the control scheme. I can almost understand Nintendo being unwilling to work on a classic-controller option for Skyward Sword but two-thirds of the MP-Trilogy used to be playable with a standardized controller. More recently there was Star Fox Zero which also forced pretty awful controls into a game with a pair of awful cameras though paradoxically, Splatoon did give you the option to turn off those awful gyroscope controls...Wouldn't have that issue if Nintendo games were also released on PC.

MysticSlayer said:
We have the PC Master Race and Dirty Console Peasants.
Click to expand...

I think the "Master Race" should own up to the Nazi origins of the concept and dub the rest of us Console Jews.

MysticSlayer said:
I still like the idea of including "Naked" in the name for emphasizes the "insane" aspect to the name.
Click to expand...

Johnny Novgorod said:
I think the "Master Race" should own up to the Nazi origins of the concept and dub the rest of us Console Jews.
Click to expand...

I've always thought it was rather obvious that PC + WiiU was, in fact, the best combination of systems. Nintendo provides more raw fun and PC provides more raw everything else than Sony or Microsoft, aside from those "cinematic" games like Heavy Rain, which just aren't my style.

Johnny Novgorod said:
I think the "Master Race" should own up to the Nazi origins of the concept and dub the rest of us Console Jews.
Click to expand...

Console Juden. Sounds more...apt, for some reason.
Click to expand...

I'd go for Untergamers instead.

Because while the Jewish bore the brunt of it, the Nazis also targeted communists, homosexuals, Jehovah's witnesses, Romanis, the physically and mentally disabled and a bunch more.

Similarly, I see Untergamers as being much broader than just console gamers. It includes handheld gamers, mobile gamers, social media gamers and pc gamers who only have low-end and/or outdated systems (or a Mac, the filthy deviants). In essence, anyone who isn't running games in 4K at 144fps on a high-end beast.

Also, INB4 someone gets butthurt, there be much sarcasm above.

MysticSlayer said:
I was thinking "regal" in terms of comparing "master race" to "peasants". Outside of this discussion, yes, Nintendo Defense Force works. For this, though, I'm not entirely pleased.
Click to expand...

I dunno, maybe it's just my bias. I associate NDF with people I've had to block who I otherwise like, but came at me telling me how OBJECTIVELY WRONG I was to dare not buy a Wii U because we know the NX is a thing but don't know exactly what it is or how it will change the landscape of Nintendo's releases and other hardware and that maybe Nintendo might have been dumb not to just be up front with us because it might hurt sales, which is evidently code for "scream at me in the hopes that that will make me want to give Nintendo more money."

Granted, we know a liiiiittle more now, but still. I've largely stayed out of Nintendo discussions, because I've grown super weary of being brigaded if I don't want to spend my own money on something I'm not sure I will get value out of. Or simply brigaded for not loving a Nintendo announcement enough. This, evidently, makes me worse than several third-world despots.

No thanks, I tried a few Nintendo games around 30 years ago when I was their target audience and didn't like them, and from having observed what they produce since then, I still don't like them and have more than enough games that I do like to waste my time & money playing games from a company that doesn't interest me in the slightest.

What you're asking me to do is to actually flip my likes and dislikes around and to suddenly play and enjoy games that I don't like at the expense of games I do like, which would be a tall order coming from I knew and trusted, let alone some random person on the Internet.

I'll make you a deal, if, for the first time in their allegedly amazing best developer ever 35 year history, if the Glorious Nintendo actually makes a game that not only doesn't repulse me with its art style and aesthetic, but actually interests me enough to want to play it, and if Nintendo don't make the barrier to playing the game being a mandatory purchase of one of their consoles and release the game on a platform that I own, then I'm perfectly prepared to give them a second chance and play a demo of that game, but until that happens, Nintendo and all their products are irrelevant to me and your attempts at trying to make me change something as core to my psyche and sense of self as my likes & dislikes and gaming tastes are wasted on me.

To me Nintendo and its games are like bananas, I tried them once as a child and dislike them and to this day I just have to be in the mere presence of someone enjoying one to be reminded that I still don't like them (although it was never in any doubt).

Ugh, we've been over this.
It's not the PC Master Race, or the "Nintendo Supermen", but rather the PC Bourgeoisie, and the Console Proletariat.
When the oppressors are against the wall, they will be forced to play on comfy couches using proper control-schemes, and standardized hardware that results in easier development.
P

Gamerpalooza said:
I'm a gamer not a brand loyalist.

If a platform has games I want to play I'll play them. My allegiance is to what will satisfy me.
Click to expand...

I agree with this.

I'd like to add to it that it is fine to have a favourite system, if you must a favourite game company, but a lot of people seem to think that they need to be completely insufferable about it. We apparently can't discuss the differences in our tastes without throwing insults around to people who disagree.


retsupurae yahtsee said:
Join the cool, smart kids and abandon those P.C. nerds, the requirement are to beat ten games from the NES, SNES and N64 era and five from later systems.
Click to expand...

Are... are you serious with this? I'm genuinely not sure whether this is meant to be sarcastic, somewhat self-aware but serious, or whether you mean this with a straigth face and all.
R

Yes, this was half-serious, half-satirical. I got annoyed by the fact that a sarcastic joke was being treated like proof of superiority, the banner touting it everywhere on this website, the Nazi slogan, so I made this. Supermen being derived from the Nazi term ubermenschen, treating Nintendo fanboyism as proof of intellectual superiority, the implications that you have to be on this side to be a true gamer, the dismissal of everything else--this is how the whole P.C. master race thing sounds to me. I do love the PS2 and 3 and the first Xbox, though I have been turned off of the Xbox by Microsoft's policies in recent years; a lot of the Sony and Microsoft shown at E3 look great; and I am not exclusively a Nintendo player.

As a member of the Multi-Platform Monarchy and rightful rulers of the realm, I speak verily when I say to enjoy your video games and play the systems with the most games that will entertain you. You owe your allegiance to no one. 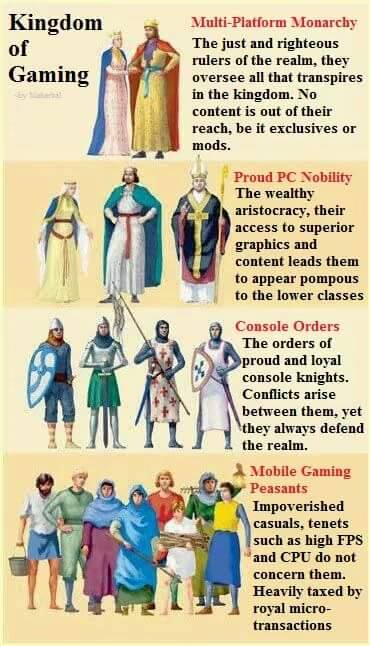 MysticSlayer said:
We have the PC Master Race and Dirty Console Peasants. But we've never had a way to describe Nintendo fans. I propose Naked Nintendo Inmates. So rejoice Dirty Console Peasants! You aren't quite the worst in the world. You're still not that great compared to us PC Master Race, but at least you aren't a Naked Nintendo Inmate!
Click to expand...

Wasn't it the " Nintendo Defense Force? ". I kinda vaguely recall people calling them that back when another poster ( who's name i also don't recall) use to make the same threads.

OT: i like how the console vs Pc war completly ignore Nintendo. That in and of itself should give you the answer OP.

I wouldnt really gear a PC master race argument towards Nintendo. Their not really fighting for the same market. Pc , PS4 and Xbox are. The best thing about Nintendo is how they've done handhelds. No one has replicated that success. PSP is the cloest but they have no I.PS close to pokemon in sales.
Show hidden low quality content
You must log in or register to reply here.
Share:
Facebook Twitter Reddit Pinterest Tumblr WhatsApp Email Link
Top Bottom