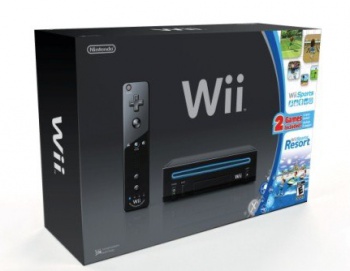 With a new console on the horizon, Nintendo introduces a bargain Wii bundle complete with both Wii Sports titles.

In a move almost certainly designed to clear out some old stock in anticipation of its Wii U console debut, Nintendo just cut the price of the standard Wii from $149.99 to $129.99. In addition to the price drop, the company is introducing a new Wii bundle that features a black Wii console, one controller, and a game disc that includes both Wii Sports and Wii Sports Resort.

Bringing the console $20 closer to the bargain basement $99 price point is great for those who haven't yet bought a Wii for their own homes. But given that the two included Nintendo titles are made for multiplayer fun, expect to shell out another $39.99 for a second Wii Remote Plus in order to really enjoy what the package has to offer.

As the best selling Nintendo home console of all time, the Wii will likely have a healthy life even after the Wii U hits store shelves. Cutting the price just before the biggest shopping season of the year will certainly help that, and it's going to be rather interesting to see how the sales numbers for a 6-year-old piece of hardware stack up to the new Wii U hotness.

Will consumers that skipped a purchase on the Wii be willing to put a $299.99 Wii U on their gift giving list this year, or will Nintendo's last-gen box see new life? We won't have to wait very long to find out.

I haven't seen any significant development for the Wii since Skyward Sword, while its game sales utterly bombed at the end of 2010 (leading in part to Nintendo's first posted loss).

Skyward Sword was more or less Nintendo's swansong for the Wii. From thereon out it has just been a matter of lowering the price bit by bit until everyone bites.

I wouldn't be surprised if it does end up hitting the $99.99 mark soon, hitting that magical place that the PS2 occupied for so many years.

If that drop hits Europe I will be buying a Wii... oh wait, no I won't. I was thinking of all the games on it I wanted to play, every single one that sprung to my mind was a Gamecube game, oops.

I just assumed everyone who wants a Wii already has like three of them. In the back of a closet, collecting dust somewhere.

Hell, people who have never heard of Nintendo probably have a Wii by now.

got my wii sitting on my gaming shelf right now......just sittin there....being a wii.....I turn it on sometimes to check for updates and look at the store......yep.

I think the Wii did have some really great games over its lifespan, though some of them went largely unnoticed under the weight of a lot of shovelware. The good releases were definitely further apart than those on the 360 and PS3, but discounting all 1st party gimme titles (of which there were actually many compared to the GCN), Rune Factory Frontier, Xenoblade, Last Story, Trauma Center, No More Heroes, and Fire Emblem all made the console worth the price. For the savvy shopper, I think the Wii is an excellent value at this point to catch up on what ended up being a worthy, albeit cozy, catalogue of titles.
Show hidden low quality content
You must log in or register to reply here.
Share:
Facebook Twitter Reddit Pinterest Tumblr WhatsApp Email Link
Top Bottom