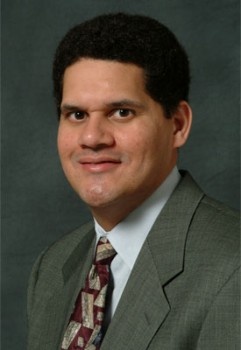 Halo 3 [http://www.nintendo.com/], and that once again Nintendo won't be able to meet demand for its Wii console over this year's Christmas season.

Speaking in an interview with the Crackdown [http://www.mercurynews.com/search/ci_7030075?IADID=Search-www.mercurynews.com-www.mercurynews.com&nclick_check=1]and a variety of games that are, in the end, quite similar: First-person shooter experience, multiplayer capable online. Tell me what's new?" he said. Referring to Nintendo's software mix, he said, "I am fortunate to have a series of [games] that are all going to drive substantial sales for me and are all targeted to different parts of the consumer mix."

Unfortunately for potential buyers, those sales may once again be limited by supply, which Fils-Aime claims is a question of underestimating demand rather than lack of production capability. "The issue is not a lack of production. The issue is we went in with a curve that was aggressive, but the demand has been substantially more than that. And the ability to ramp up production and to sustain it is not a switch that you flick on," he said.

"We're working very hard to make sure that consumers are satisfied this holiday, but I can't guarantee that we're going to meet demand," he continued. "As a matter of fact, I can tell you on the record we won't."

Fils-Aime suggested holiday shoppers should keep their eyes on a wide range of retailers in order to increase their odds of getting a Wii [http://www.wii.com]for Christmas, and that they should check back often for new shipments. "We're going to flow hardware," he said. "It's not that it's going to show up only on one occasion. It's going to be flowing in.

"The only other pragmatic advice is that we're aware of the situation, and we're working very hard to address it. Believe me, I'm constantly pushing for more capacity and more volume."

I totally agree on what He said "Tell me what's new?" about the Xbox lineup. All those sales of Halo was only for those who already had the 360. Learn from Nintendo.
R

There are people who bought 360s for Halo...but they did so before Halo released. You'll see very few sales for 360s driven by Halo3 after launch because of the reasons stated (and because it's Halo2).

Meanwhile the Wii...is just fun. The titles for it, are fun. The only serious complaint I have is the lack of online competitive play for many titles (such as Wii Sports). If you have real live people that will play it with you...it's a lot more fun.
I

Agree with Zera also, Halo 3 is a complete snooze fest, and only holds a glimmer of hope through multiplayer.
A

What's the Wii lineup, now that the TGS has passed?

Come on Reggie, you sure you can't crack that stock limit?
I have hard times hearing that Nintendo does not have the industry to back up the production of a rather cheap Gamecube 1.5, where each unit sold since day one was already generating large profits.
Sony, I could understand if they had a great demand. Their console is expensive and a bit more complex. But Nintendo?

Limited stocks keep the prices up, the demand forever going, and increase the sales rate.
I

I highly doubt Arbre that they are ACTUALLY going to be low on production. I think it's just a marketing ploy to get people to run out and buy them thinking they won't be available for the holidays.
J

and agand console war. plz dont say ting like halo3 suck!. every one have different opinion and taste. i hate playing game like mario or zelda and game like metroide is not fun for ME. i like HD graphique that why i have a xbox360 and not a wii. the wii is new and fun to play but i am a big (well not THAT big) gamer and i dont see myself play 2h every day on the wii. halo3 is like halo1 and 2 but way better but on the multiplayer side its realy simmiler to halo2. plz tell what you tink as your own opinion
Show hidden low quality content
You must log in or register to reply here.
Share:
Facebook Twitter Reddit Pinterest Tumblr WhatsApp Email Link
Top Bottom