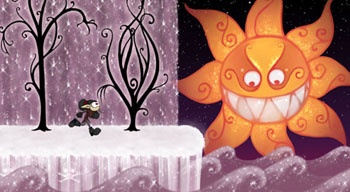 A day after news emerged that World of Goo will not be released on WiiWare in Europe, it turns out that Eternity's Child may not come out on Wiiware in North America.

Developer Luc Bernard said that he's received no word about any North American release for the game from its publisher, Alten8.

Addressing the issue, he said:


Bernard went on to note that he does not own the rights to the WiiWare version and therefore its distribution was not in his hands.

The Frenchman also fumed about apparent disinterest from publishers in his other game titles that have been deemed too far outside the mainstream.

"Maybe I should just put in a space marine with a gun that is defending earth from space nazis for them to be interested!" he opined.