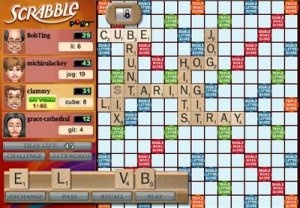 The battle for Pogo [http://www.facebook.com].

Already available on Pogo and launching for Facebook later in July, Scrabble will be the first Hasbro-licensed product from EA to land on a social networking site. "Scrabble is one of the best social game brands in existence and we've worked diligently with the Hasbro team to ensure that regardless of the platform you're playing, you'll be able to enjoy a world class version of Scrabble with friends or family," said Chip Lange, general manager of EA Hasbro Games. "We're delighted to be bringing communities everywhere access to one of their favorite games."

"Hasbro, together with EA, is eager to share our expertise and technological know-how by bringing a genuine Scrabble experience to fans throughout the U.S. and Canada whenever they want and wherever they go," added Hasbro Digital Media and Gaming General Manager Mark Blecher. "We understand the current popularity and potential of web-based and social network gameplay for a wide range of our toy and game brands. EA and Hasbro are committed to providing Scrabble fans with a great digital game experience."

Interestingly, that "understanding" didn't seem to come until the launch of shut down the game [http://www.scrabulous.com/], claiming its use of an identical board layout, rules and even a similar name were blatant copyright infringement. A popular "Save Scrabulous" user group was created in response, and thus far Facebook has refused to pull the game.

Despite that, EA and Hasbro are receiving support for their efforts from at least one influential corner of the Scrabble world. School Scrabble Championship [http://www.scrabble-assoc.com/] and the current interest in Scrabble for social networking. I am particularly pleased that the Pogo and Facebook EA Scrabble games offer such simple and clean interfaces that allow players to jump right in and start playing."