One Bundle To Rule Them All? The One Ring Gets A Bundle of Holding

One Bundle To Rule Them All? The One Ring Gets A Bundle of Holding 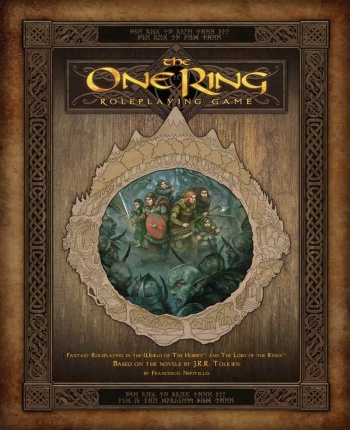 Love The Lord of the Rings and tabletop RPGs? Well, Cubicle 7's The One Ring combines both in today's Bundle of Holding.

It is impossible to deny the monumental influence <a href=http://www.escapistmagazine.com/tag/view/lord%20of%20the%20rings?os=lord+of+the+rings>The Lord of the Rings had on tabletop RPGs. Not a single D&D campaign world - let alone their elves, dwarves, orcs, or halflings - would exist if not for the iconic work of J.R.R. Tolkien. So it's only natural to have licensed LotR RPGs from time to time, and perhaps the best-regarded is Cubicle 7 Entertainment's The One Ring. Want to play for yourself? Well, you're in luck: The One Ring and several supplements are available now in <a href=http://www.escapistmagazine.com/tag/view/bundle%20of%20holding?os=bundle+of+holding>Bundle of Holding's pay-what-you-want tabletop set.

The One Ring is set in the Wilderland five years after the Battle of Five Armies, when Smaug has been defeated but Sauron's forces loom on the horizon. Players use the rules to create Heroes and Fellowships before adventuring in recognizable locations like Mirkwood, the Lonely Mountain, or Lake-town. You'll confront familiar enemies, such as orcs, stone-trolls, giant spiders, and wargs, not to mention the insidious Shadow looming over it all.

Never heard of Bundle of Holding? Think of it as a Humble Bundle for tabletop RPGs. Each set offers a Starter Collection at a fixed price, along with bonus content if you pay above the average. What's more, extra books are usually added to the collection as time goes on, giving players more to look forward to.

In this case, The One Ring's $15 Starter Collection comes with the 2014 core book, a Loremasters screen, and the Lake-town guide. Paying above the average throws in campaign resources. The Darkening of Mirkwood is a complete thirty-year campaign covering the era of Sauron's growing influence. The Heart of the Wild is a Mirkwood gazetteer, describing locations in more detail while adding to the bestiary. Finally, Rivendell expands your campaigns with new adversaries and adventures in eastern Eriador and "the Last Homely House of Elrond".

Source: <a href=https://bundleofholding.com/presents/TheOneRing>Bundle of Holding