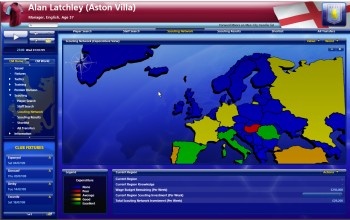 The "pay what you want" promotion for Championship Manager 2010 [http://www.championshipmanager.co.uk/] has turned out to be a big success, with sales of the game actually going beyond what developer Beautiful Game Studios was expecting.

Remember the Little Rascals episode where the gang wanted to put on some kind of play but nobody was willing to pay to see it, so Alfalfa came up with a harebrained "pay as you exit" scheme that would let people see the play, then decide on the way out if it was worth any money? Spanky, ever the astute businessman, got all pissed off because he thought that nobody would pay for it if they didn't have to, but after a series of madcap misadventures, everyone in the audience was so blown away by the experience that they forked over their cash and the gang made a fortune.

That lesson wasn't lost on the gang at Eidos and Beautiful Game Studios, who announced in August [http://www.escapistmagazine.com/news/view/93948-Eidos-Trying-Pay-What-You-Want-Model-for-Soccer-Game] that Championship Manager 2010, the latest addition to the long-running soccer management franchise, would let people pay any price they wanted for the digital release of the game. Critics slapped their foreheads and rolled their eyes dramatically, presumably thinking that Eidos might as well just give the game away, but according to Beautiful Game Studios General Manager Roy Meredith, the program is actually doing even better than expected.

"It is going well, really, really well. I can't give out numbers, but it's going well from two perspectives. The amount of publicity we had exceeded what I was thinking we were going to get. It was amazing. And from a sales perspective as well it's exceeded what we wanted to do, which is great," he told VideoGamer.com [http://www.videogamer.com/news/pay_what_you_want_promo_a_huge_success_for_cm2010.html].

The average price people were paying for the game is "substantially more" than the minimum, he said, adding that one particularly generous customer paid so much that the company had to verify it as a legitimate purchase. He also noted that while there was "a lot of debate," nobody at either Eidos or Square Enix ever gave a thumbs-down to the idea.

"The Eidos board and the Square Enix board have been incredibly supportive of the idea," Meredith said. "Now I know that sounds like I'm bound to say that, but they really, really have. When it was first discussed one of the biggest evangelists was the CFO, that's a finance guy. But they've been very supportive. A lot of debate about how it works, how we take it to market, but no arguments."

The "pay what you want" promotion for Championship Manager 2010 runs until September 10, so you've still got a little bit of time to squeeze in an order at champmanstore.com [http://www.champmanstore.com/home/flags].

You see this, here folks? Eidos and Beautiful Game Studios with this game are doing it right.

On the other hand, Activision and Square with MW2 and FFXIII are doing it very very wrong.

Good on them, I didn't think it would work myself, but they're daring method appears to have proved me wrong! well done

edit: wait WHAT?! Square Enix were IN on this idea?! so... wait, what the hell if up with their ridiculous pricing of Final Fantasy XIII?

I think the main reason for all the publicity is the same reason Radiohead's album got a lot of publicity: it'd never been done before in that particular format. (I think, in retrospect I'm probably wrong)

I was tempted to give it a go (I'm more of a Football Manager fan) but at the time I'd spent all my money on birthday presents and I couldn't even afford the £2.50 transaction fee. Then I thought I'd give it a miss.

If I was even mildly interested in that kinda game, I would head straight to the site and get a copy. Other companies should take up this kinda sales strategy. Here is the proof that it works, and it works well. So...

I have a dream: "pay what you want" promotion for StarCraft II with actual LAN support in it!

So...If that worked.. then just a big WOOOOOOOOOOOOOooooooow...

I hope other companies use this. But I will tell you one thing, if the game is shit, and the dev knows it, you wont get a 'pay what you feel' plan it will be $50.
BGS were really happy with what they have created and have one of the most closely knit community/dev forums I have ever seen. Run into an issue, post it and I gaurantee you a dev post if it is a new issue.

I'm not surprised that that will work with a low-budget game that's targeted at such a niche audience. The kind of people that are interested in playing a "soccer" management simulation aren't really the same group that are going to be pirating the latest AAA titles or trying to crack install keys. But the titles that this would work on are the ones that could likely also survive with donation buttons, or as shareware.

It's not the same as a $20m blockbuster 6 years in development. The mass market would generally not pay for anything at all if given a choice, regardless of how good the game is.

I definitely think the industry would be better off lowering game prices in general - I think we have enough anecdotal evidence (from Steam discount weekends and ESPN NFL 2K5) that lower prices really will increase sales enough to compensate. But I don't think this is a reasonable way to do it for most games.

Now if only I had a steady paycheck, I would've jumped all over this. But since I don't have any money then BOOOOO...