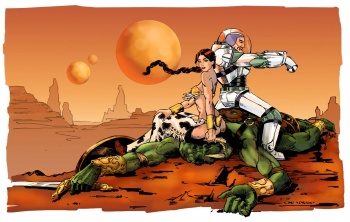 What happens when you combine Edgar Rice Burroughs's Barsoom series with characters from Pixar's movies? Some of the craziest sci-fi artwork in recent memory.

John Carter of Mars is one of those IPs that's been in film development since (technically) the 1930s. Needless to say, nobody's had much luck making an actual John Carter movie. However, the current film project looks like it might actually get off the ground, seeing as how Disney's acquired the rights and Andrew Stanton -who directed Wall?E and Finding Nemo- has been attached to the movie (he was "loaned out" from Pixar to Disney for this specific movie). With someone from Pixar involved helming the film, Draw2D2 announced an art mash-up that combined Pixar characters in a scene with <a href=http://en.wikipedia.org/wiki/Tars_Tarkas>Tars Tarkas, and the results are certainly entertaining.

The submissions cover the range of clever and cute (like the one seen at right) to crazy and epic (like the one featuring Tar Tarkas standing over the Squeaky Aliens. These pieces are pretty entertaining; hopefully Stanton's able to work a subtle Pixar cameo/homage into John Carter of Mars when he makes it (maybe a wrecked Wall?E unit?).

There's a couple of other illustrations here in the attached gallery, but you can see even more over at Draw2D2.

The four Arm woody vs Buzz is gotta be the greatest among those three.

I've always had a soft spot for (most of) the Tarzan books, so anything by Burroughs, I will look forward to. I haven't read The Princess of Mars yet but that will change very quickly if this project actually gets the go-ahead.

I always thought Burroughs was under-rated.

Dude must've had a blast during 420.
That picture on the right is simultaneously awesome and a little creepy.
I'm certainly not going to look at HER the same again...

This reminds me of when the pixar artist did popular movies.
I'm sure that news article is around here somewhere, months ago. I'll see if I can find it. 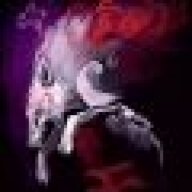 The third one looks like a B-movie poster, one that I want to see so badly it hurts. 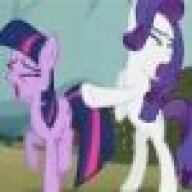 That was amazing and terrifying at the same time.

I feel that I have accomplished something today.

Ah well, i guess if its Pixar i cant expect a naked Dejah Thoris, as per the books....still i think Pixar might be about the only studio that could do an animated John Carter justice. 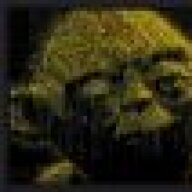 Pic 3 of 3 seems to be a little jacked. No matter how the green thing is positioned, either on his back(which seems to be the case) or front. It's sword carrying hand is twisted wrong. 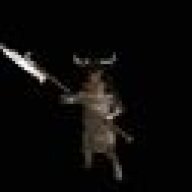 Don't really see what's so awesome about this, TBH.

As a long-time John Carter of Mars fan, I'd just like to say that I hope this movie never gets made.
D 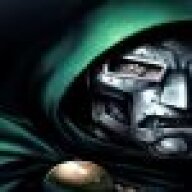