This is my fifth review here. No one commented on my other review of PixelJunk: Monsters, so hopefully this critique of PixelJunk: Eden gets noticed. Enjoy.

Oh, and while I appreciate all comments, I just want to say that I'll probably work in a better closing paragraph.

Many people are of the mind that two dimensional platforming is dead in modern video games, and that it is a genre forever resigned to the archives of human culture alongside vinyl LP?s, silent films, VHS tapes and Carrot Top. The reasons for this are obvious, I guess. Three dimensions are better than two, character models with detailed sweat mechanics are better than 8-bit plumbers, why kill Dracula with a whip when you can kill terrorists with an air strike, etc. etc. It?s easy to see why people don?t give the time of day to two dimensional ledge hopping when there are high definition aliens, zombies, and dinosaurs to kill (and if they do donate that time it?s out of thinly veiled nostalgia), but what I don?t understand is why people automatically assume games in two dimensions are cakewalks. I could go on for hours about the punishing difficulty of the final levels of Donkey Kong Country 2, the infinite replay value of Super Metroid, or Symphony of the Night having the depth of a bottomless pit, but I?d much rather talk about a new game that can proudly join the ranks of great 2D platformers past and present, if only for the masochistic challenge (and unfortunately not much else).

PixelJunk: Eden is an incredibly simple game on the PSN that makes use of only one analogue stick and one button (two buttons if you?re really advanced). You play as a Grimp (portmanteau of Grip and Jump) who spends his days in gardens hopping around with little consequence. There is no cause or purpose or reason to the existence of this little critter who bares a somewhat striking resemblance to a sea monkey. It?s just you, a garden, and an impatient clock.

As you collect Spectra, the colour palettes change. Sometimes between subtle shades, and sometimes to and from contrasting colours...

It?s impossible to even slightly jazz up Eden to more than what it is. There is no amazing story, no deep gameplay to discover, no outstanding visuals (however unique and appropriate they may be), and a thoroughly innocuous soundtrack. The ideal word to describe Eden is ?lazy?, but that?s a well deserved compliment.

Eden is essentially one main garden that can be freely explored to reveal ten unique gardens scattered throughout the main world. The ten gardens are the games actual levels, complete with a timer and Spectra to be collected. Spectra are used to grow plants that the Grimp can use to access other areas of the main garden. Each garden has five Spectra to be found, which means that there are 50 Spectra in total to collect. Spectra can be collected in any order from any garden at any time.

While Eden would appear to proudly wear the labels of ?arty game? and ?non-game?, the developers don?t seem to like the latter title, and sculpt a few objectives and boundaries for the player. It?s entirely reasonable that a game can?t go on forever, whether in duration or breadth, but the limitations imposed are suffocating and redundant.

The biggest issue to be had with Eden is the in game clock. Whenever you enter a garden, you are given a pellet meter that diminishes over time and needs to be refilled in order for the play to be extended. This can be done by collecting small and large time pellets, activating two seeds in succession, collecting Spectra, etc.

Initially, the clock isn?t that big of a deal. You have ample time to explore the worlds, and time pellets are scattered liberally throughout the first few gardens. During the last four gardens however, time is constantly fighting against you, appearing to run out at an accelerated pace as you prance around frantically trying to refill your meter and advance through the level. Exactly ten Spectra from the end, the game turns on a dime from a calm and gentle sea to a violent stormy ocean. Time runs out almost unfairly after vainly exploring the garden for a good length of time, and there is nothing but a half hour of your wasted life to show for it. 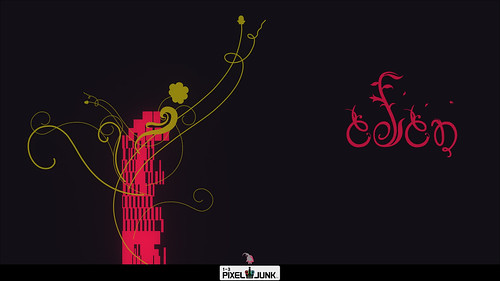 A desolate landscape crying out for colour?

You?ll spend a lot of time in any given garden, but often not because it?s particularly massive. While time is a harsh mistress to be sure, what ultimately cripples the game is the level of repetition, and ultimately the confluence of those two bothers. You can only collect one additional Spectra at a time, and once that goal is fulfilled you?re whisked away and have to start again. It?s not entirely unreasonable on its own, but the kicker is that you have to collect the same Spectra again, plus one new one. For example, one Spectra on the first entry, the same Spectra plus one more on the second entry, the same two spectra plus onr more on the third, etc. until all five Spectra are collected for good, and you?re so annoyed that you?ll never want to enter that garden again.

While the gameplay is very simple in that you can only jump and swing from silk, it does evolve as you enter the later gardens. The spores that contain the pollen necessary to fill seeds damages your silk from the fifth garden onwards, and severs it on contact in the ninth and tenth. There are flowers that blast you at a fixed speed in a fixed direction if you fly into them, teleports, gravity changers, etc. etc. Any of these unique obstacles compound the devilish platforming of the final gardens, and the final result is a game that goes from serene to sadistic without you being aware until it?s too late.

Eden is a unique experience almost brought to its knees by redundancy and impatience. It?s certainly worth a look for its design and difficulty, and the cheap price doesn't hurt either.

Nice review, I'm in Garden 07 at the moment, and noticed the difficulty/frustration level is beginning to annoy me. I think the game would have benefited from an option to turn the clock on or off, depending on whether you want that extra challenge.

Also - although you may think you've "just wasted half an hour of your life", compared to the typical MMO, not naming any names WORLD OF WARCRAFT, half an hour is nothing.

Yeah, but since I've never actually played an MMO and think I have a somewhat hectic life, a wasted half hour does hurt a bit.

The gravity changes in Garden 7 annoy me to death. I have 2 Spectra left in that garden, and any progress made is gone when you start falling sideways. I'm 41/50 right now. 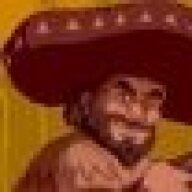 I was able to handle the difficulty curve up until the level that spins around counter clockwise messing up your orientation and progress.