Plants vs. Zombies Get Bricked in New LEGO Ideas Campaign

Plants vs. Zombies Get Bricked in New LEGO Ideas Campaign 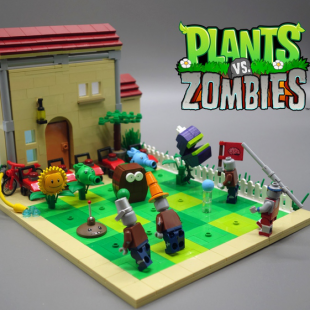 Chances are you've played <a href=http://www.escapistmagazine.com/tag/view/plants%20vs%20zombies>Plants vs. Zombies at some point. After all, Plants vs. Zombie 2 managed to get downloaded more than 25 million times in less than two weeks, something that suggests a certain level of popularity. That being the case, it was only a matter of time before someone did what someone always does and decided to rebuild the game <a href=http://www.escapistmagazine.com/tag/view/lego>with LEGO.

A game developer based in China, Kai recently launched a LEGO Ideas campaign aimed at producing an official construction set based on Plants vs. Zombies. His build includes the player's house as well as six "loyal plants" and four "adorable" zombie mini-figures that look pretty danged impressively close to those in the actual game. The plants include a Sunflower, Peashooter, Chomper, Wall-nut, Potato Mine and Snow Pea. The zombie's roster meanwhile is made up of a Flag Zombie, Conehead Zombie, Buckethead Zombie and Pole Vaulting Zombie.

Currently, Kai's campaign still has a ways to go, having just barely passed the 700 supporters mark. That said, that number is pretty decent whent you consider that it gained those supporters in a mere seven days and that it still has another 358 (as of the publication of this article) to hit the 10,000 required for <a href=https://ideas.lego.com/howitworks>official review. Granted, the whole thing could wind up being derailed in the end by licensing issues, but the odds currently aren't looking too bad for this plastic take on sentient flowers battling the undead.

The problem with that, unfortunately, is that K'Nex is already doing it:
http://www.knex.com/products/plants-vs-zombies-toys/

Omg! PVZ on Legos!! I hope my other favorite zombie game, Tapslayer: Alice in zombieland, is on lego too! Hehehe
A

GlobalDestiny said:
Omg! PVZ on Legos!! I hope my other favorite zombie game, Tapslayer: Alice in zombieland, is on lego too! Hehehe
Click to expand...