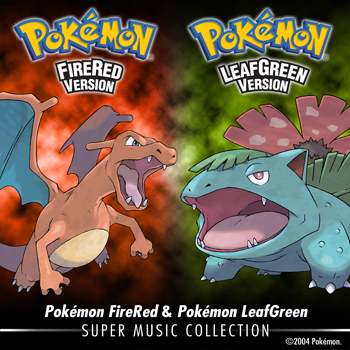 The soundtracks of following Pokemon games will also make it onto iTunes in due time.

The soundtrack contains 90 songs and has adapted and orchestrated versions of the tracks from the Gameboy Advance remakes of Pokemon Red and Blue (Red and Green first in Japan). Junichi Masuda, Go Ichinose, and Morikazu Aoki.

This soundtrack is a part of the Super Music Collection by Game Freak. The first Pokemon soundtrack released as a part of this collection was Pokemon X and Y [http://www.escapistmagazine.com/news/view/129634-Pokemon-X-Y-Soundtrack-Captured-on-iTunes], the latest Pokemon games with a much updated soundtrack. Future soundtracks in the Super Music Collection will include HeartGold and SoulSilver, Ruby and Sapphire, Diamond and Pearl, Black and White, and Black 2 and White 2.

The Pokemon series has some of the most recognizable music, and the oldschool feel of FireRed and LeafGreen has music my parents would even know. From Pallet Town's theme to the fanfare of an obtained Pokemon or item to the eerie Lavender Town theme, many Pokemon fans could hum these tunes in their sleep. The soundtrack doesn't have nearly the amount of songs that X and Y does, but if you want to own all 90 classic songs for just $12, nostalgia and appreciation for well-composed music will thank you.

All of my yes. Love all the Pokemon Soundtracks.

Shame I don't have iTunes. I love the soundtracks to the old games.
I wonder whether it'll come out on other platforms, 'cos I'd be all over this if so... *sigh*

Jharry5 said:
Shame I don't have iTunes. I love the soundtracks to the old games.
I wonder whether it'll come out on other platforms, 'cos I'd be all over this if so... *sigh*
Click to expand...

Despite having iTunes, I bought the previous soundtrack (X&Y) in CD form from the internets! I assume this one will be the same also.

Okay Nintendo, now release the Mario OSTs because right now importing those ones cost more than their respective games. >.<
I mean if Nintendo starts releasing more OSTs this way then I'll be happy.

I'm really excited for this. I especially loved the heck out of Pokemon B/W 1 and 2 soundtrack.

I have a feeling a fully orchestrated version of these tracks are coming soon ala Zelda OST that came with Skyward Sword.


Of course, I like to think what finally convinced them to do this was the popularity of the fanmade (and well done) Pokemon Reorchestrated album that came out last year, the amount of money said album made (with royalties paid of course) and the subsequent success of their latest Kickstarter to do an orchestra of ALL of the Pokemon games.

Maybe we can push them to release a concept art book. If not that, at least an illustration collection from Ken Sugimori and other high profile artists in the Pokemon art team.

Neronium said:
Okay Nintendo, now release the Mario OSTs because right now importing those ones cost more than their respective games. >.<
I mean if Nintendo starts releasing more OSTs this way then I'll be happy.
Click to expand...

I sooooo wish publishers/developers released more OSTs. Some are just to good to not be out there.
Click to expand...

Fire Emblem awakening soundtrack being released only in Japan is a crime.

I wish all game developers would release their OSTs on iTunes and other similar services.

I'd gladly pay for those.

Dragonbums said:
Fire Emblem awakening soundtrack being released only in Japan is a crime.
Click to expand...

That's usually the case for most OST soundtracks though. I mean all the Kingdom Hearts ones were never released outside of Japan, and I believe the same can be said for the Mario games. Not Zelda though, since the Majora's Mask OST was the Platinum Reward for the US Club Nintendo this year.
Show hidden low quality content
You must log in or register to reply here.
Share:
Facebook Twitter Reddit Pinterest Tumblr WhatsApp Email Link
Top Bottom