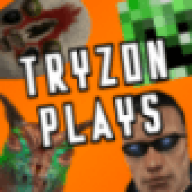 Something different today, kiddies. Paintball and traditional shooting games have a common goal: to provide the excitement of running around shooting people with none of the danger or legal consequences. Of course, combining the two by making a paintball FPS is an odd concept, since it unnecessarily distances itself from reality by a whole step. Plus it inevitably means that the game will be very niche market, especially outside of the US, since America (to my knowledge) is the paintball capital of the world.

So as a crowd-fearing Briton whose knowledge of paintball is limited to the fact that getting hit while playing still hurts like Hell (I never even knew that paintball magazines existed before), upon finding my ordered copy of SPLAT Magazine Renegade Paintball in the post, I immediately thought of the term ?flying blind?. Things seemed even grimmer after some minimal research revealed that the game has a reputation for being rather arse, and I understand why, but I?m the same bloke who called Celebrity Deathmatch ?a real candidate for the most awesome title on the planet?, so I?m among the privileged few who understand that even a game which is technically a tad shite can be entertaining despite itself. So given that I rarely approach a new game looking for things to hate, let?s begin. Only Tomb Raider gets that treatment, after all.

Jump into a standard match, and at first you?ll think ?why am I moving like my legs are made of lead?? Now it?s true that the movement speed is so slow as to rival the current genre champion, Call of Duty: Finest Hour, but at least with SPLAT you get an extremely limited sprint option. And I like how you can either crouch or lie down at a simple button press, using either B or X respectively. Pressing the same button sees you stand up again. So many (much better) shooters have tried to incorporate various stances into the controls with less success. One point to SPLAT. It also has the first leaning system in a FPS I?ve seen that actually can be helpful once in a blue moon, unlike Darkwatch and such things. Two points to SPLAT. They're hiding because they know their death's a-comin'.

Most intriguing is that you only have the one weapon ?the paintball gun, naturally- which is a guaranteed one hit ?kill?, although several versions of varying accuracy and fire rate can be picked for a match. Hit an opponent anywhere on their body and they?ll put their hands in the air before fading away. It looks silly, but makes sense in the world of paintball, and I made a mini-game out of spreading paint over anyone I hit prior to their vanishing. It?s the equivalent of teabagging, only much messier. Well, usually messier.

Headshots make no real difference, but are certainly funny. And don't even get me started on hits to the groin...

The paint blaster is a weapon that requires practice to use properly. It can shoot its deadly payload at a speed which I?ve heard is impossible in reality, but it has little long-range application since the projectiles arc downwards, rather than just going forward endlessly like in the vast majority of shooters. The trick is learning at what angle to shoot to make the pellet swoop downwards and onto its target. It?s not too hard to figure out, but the sheer originality of it warrants mention.

Also interesting is that you have infinite ammo, although you have to restock from your bottomless pellet bag, which leaves you vulnerable for a brief moment. This is something else which you don?t see much, although Battlefield 1943 is the one other example I can think of.

I said that the gun always results in instant ?death?, and this makes for an interesting change of strategy, which particularly contrasts with the modern shooters and their magical regenerating health. You have to play defensively, never standing still and hiding behind anything that?ll stop a shot. High ground is very valuable, as you can pop out and snipe folks from an angle that they have trouble hitting. The result is a game where you die an awful lot until you figure out a plan, and it?s similar to Star Wars: Battlefront in that respect, except SPLAT has a tragic absence of Stormtroopers. Both games also have questionable AI.

The bots aren't as organised as this picture suggests.

None of the stuff I?ve been talking about was immediately apparent, and at first I thought that SPLAT was absolutely pump, and I mean America?s Ten Most Wanted levels of craptacular. But through repeated play and the maintaining of an open mind, I?ve come to grow somewhat fond of this weird little title, and appreciate now that it?s a curiosity that probably won?t stand the test of time like TimeSplitters has, but does provide some good fun and doesn?t feel much like anything else.

Though you can just jump into an Arcade or Splitscreen (only up to two players) match, the Career mode is a lengthy selection of 28 challenges spread across all the various maps and utilising the game modes, even if none of the game types are anything new in the slightest. My favourite of the uninspired modes has to be Elimination, since the limited number of goes ramps up the tension, and the long respawn times are mercifully absent. There?s no actual plot besides your attempt to be the ultimate king of paintball, but criticising this hardly seems fair. After all, how would a paintball story have worked? I?d like to see that. Maybe they?ll put it in a sequel, eh?

A good presentation, setting or theme can make almost any game tolerable, and SPLAT has one that gets a thumbs up from me. The style is of the deliciously corny ?EXTREME!? kind, and the crazy announcer is the best example: ?You?re on fire!? There?s also some predictable but fitting instrumental rock silliness that gets you in the mood for non-lethal violence, although it would work just as well alongside real firearms. If someone out there on the interwebs knows a cheat to unlock a hidden minigun or something similar, I?ll put you in my will if you tell me.

The A.I. players all have chuckle-worthy names which spoof the stupidity of online handles. ?Oldskool Jesse? and ?Morbid Megan? spring to mind.

Supposedly there was some mild controversy over the rather surprisingly graphic image of a bikini-clad lady with a beaming smile caressing a paint gun which pops up every single time you beat a challenge. Frankly, anyone old enough to legally own the game (that?s twelve years) has seen far worse (or should that be ?better??) on Google Images. Even so, I would love to buy whoever put that picture there a Snickers. Why? Well, because it teaches the aggressive pre-pubescents of the world the ultimate secret for courting women. Candles? Dinner? Poetry? Pah. Just shoot paint at your girl and she?ll rip your clothes off with her teeth right there and then. Works every time, lads. Would a game lie to you, mate? 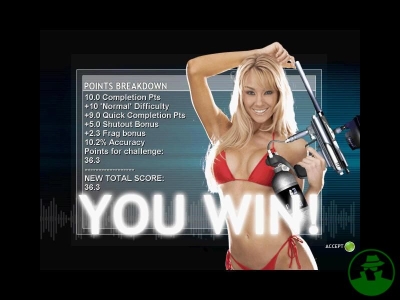 She definitely wasn't being paid to pretend that she liked paintball. Oh, no. Not at all. Not even a bit.

I like the loading screens with people getting splattered, as well. Seeing other people in discomfort is pleasing to me.

Saying much more isn?t required, since I?ve already summarised the SPLAT Magazine Renegade Paintball experience: it?s a readily available oddity that can be fun in short bursts, and might have some value as a pre-TimeSplitters warm-up multiplayer blaster. Just don?t come in with expectations of greatness and you?ll be satisfied. Not surprisingly, anyone familiar with the sport and its intricacies should find SPLAT more substantial than an ignorant like me ever could, and I quite like the game, so everybody wins!

There are at least two other paintball FPS series out there, and if my investigations prove fruitful then it might be given the spotlight for a bit in my column. I love reviewing things that none of my comrades have ever heard of, and I particularly adore recommending games that most people say to avoid. SPLAT Magazine Renegade Paintball may be short-lived and crude, but it?s also enjoyably daft and has some nifty gameplay to boot. There are likely to be better paintball games out there, but hey, that?s for another review, I think. For now, just try to imagine how incredible that minigun must be. Can you get paint-firing miniguns? I want one.

P.S. I?ve just realised who the announcer reminds me of a wee bit: that awesomely insane colonel-man from Avatar! Damn, I?ll be quoting him in my head all day now: ?This low gravity?ll make ya soft?; ?Pandora will eat you up and shit you out dead.? I can totally see him saying ?there?s plenty of room for you to run away like a pussy.? Someone should make a mod for the PC version of SPLAT which replaces the announcer with that colonel-man. That?s something else I?d put you in my will for doing.

He strikes me as the kind of man who enters children's paintball tournaments and organises Red Dawn-style bands of kid commandos. That's what I love about him.

I loved Timesplitters, so if I ever find this cheap, I will consider it.

tomtom94 said:
I loved Timesplitters, so if I ever find this cheap, I will consider it.
Click to expand...

I think my TimeSplitters reference may have been a bit too strong: SPLAT Paintball is nothing like that outstanding series, and though I recommend getting SPLAT, it's in a different galaxy of quality to TimeSplitters.

tomtom94 said:
I loved Timesplitters, so if I ever find this cheap, I will consider it.
Click to expand...

I think my TimeSplitters reference may have been a bit too strong: SPLAT Paintball is nothing like that outstanding series, and though I recommend getting SPLAT, it's in a different galaxy of quality to TimeSplitters.
Click to expand...

The idea of a strategic FPS appeals to me.

tomtom94 said:
The idea of a strategic FPS appeals to me.

[sub]Partly cause I'm too much of a wuss for real paintball[/sub]
Click to expand...

Fair enough then. It's just that your previous comment implied that you though SPLAT was similar to TimeSplitters, which I never meant to communicate. Certainly find SPLAT cheap somewhere, but in no universe I've been to could it ever be considered similar to 'Splitters.
Show hidden low quality content
You must log in or register to reply here.
Share:
Facebook Twitter Reddit Pinterest Tumblr WhatsApp Email Link
Top Bottom